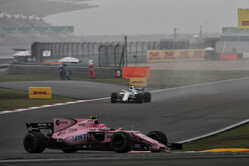 Following the disruption caused by the weather to today's two practice sessions, the result of the medical helicopter being unable to land at the designated Shanghai hospital which is 23 miles (35km) from the track, and with similar conditions expected on Sunday, there was talk of the race being brought forward to Saturday.

While usually the race would be held over until Monday, a move that would be disastrous in terms of viewing figures, the situation was further complicated by the fact that this weekend's event is part of a back-to-back with Bahrain and the F1 freight is due to be shipped out on Sunday evening.

Amidst talk that the proposal to bring the race forward would be discussed at the drivers briefing, Race Director Charlie Whiting has ruled out the idea, which would have required the unanimous approval of the teams anyway.

Confident that the conditions will not be as bad on Sunday, Whiting has ruled that the weekend schedule will continue as originally planned.