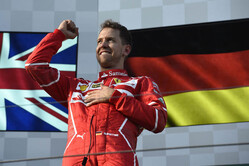 The 2017 Formula 1 season began in Australia, with victory for Sebastian Vettel (spoiler!) over Lewis Hamilton.

Together to discuss all the salient events of the weekend, the Pitpass trio of editor Chris Balfe, Mat Coch and Max Noble jump in the studio to do what they do best... moan. They also discuss the race.

Strangely, Vettel's drive to victory barely gets a mention. Nor, for that matter, does Hamilton's battle with Max Verstappen. Even Daniel Ricciardo's weekend, like a pair of week old socks, only gets aired briefly at the very end.

Instead what got the guys really excited about the Melbourne event was the glimpse it gave us into the shape Formula 1 will seemingly take in 2017 and, if Coch is to be believed, until 2019 at the earliest.

The big question is; do the guys like what they saw? There wasn't a lot of passing, but there never is in Melbourne, though that in itself leaves the team trying to work out if that made the race good or bad.

The other big question was always going to be how much faster are these aggressive new cars - not that the mean, aggressive look prevented a track invasion at the end of the race.

While we were promised an 'all new', 'real deal' F1, there are compelling arguments to suggest the powers that be have not delivered on that front.

Noble suggests the sport's new owners, Liberty Media, have also failed to deliver in what really was their first real day on the job.

Of main concern to the team however is the question of what's bubbling away behind the scenes; the talk and posturing from the sport’s players and rule makers, and the path the sport is seemingly heading.

For example, did the simplified TV graphics, which didn’t even display the order, signal the sport reaching out to new fans or is Liberty merely pushing fans towards its (paid for) app. And why is the media easing off in its interaction with the written media.

Has Liberty Media transformed the sport, are we on the precipice of a new golden era for Formula 1, or, like the chippie up the road, is it just the same business under new management?