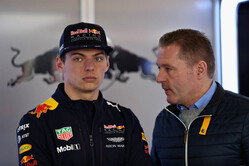 Whilst his father Jos, over the course of his 107 Grands Prix career got to enjoy the Ford V8, Hart V8, Ford V10, Supertec (Renault) V10, Asiatech (Peugeot) V10 and Cosworth V10, young Max Verstappen has only ever got to race the Renault and Ferrari hybrid power units.

And with FIA president Jean Todt ruling out any kind of return to the old engine formula, insisting that "society wouldn't allow it", it is highly unlikely that Max will ever get to sample the wide range of configurations his father enjoyed.

While he is happy with the hybrid era, he admits that it must be disappointing for the fans, whilst fearing the sport might go yet further down 'Electric Avenue'.

"I think it would be very nice to have a V10 engine or something, with the lovely sound," he told Motorsport.com.

"The current engines are nice for me in the car," he added, "but I think it's not really impressive for the fans, if you compare it to a V10 or V12."

With the FIA fully behind the Formula E series, and Todt known to be keen to see F1 move in the same direction, and not forgetting the sport's governing body's plan for a new formula in 2021, Verstappen hopes that even if F1 cannot go back (to the V10s and V12s) it will not go any further down the electric track.

"Let's keep things how they are for the next 15 years," he said. "I would be fine with that. After that they can make the whole thing completely electric.

"After that I'm going to do other things", he added. "I already have some things in my mind I would like to do, but of course this is still quite far away. I hope that the sport is still using a petrol engine by then. One that also makes some sound."