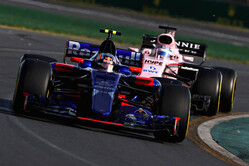 Sebastian Vettel's victory at the season opening Australian Grand Prix went a long way to easing concerns that the 2017 campaign would be another Mercedes cake walk.

However, if that was the good news, the bad news is that the new formula has delivered the type of racing we all feared it might.

With the latest generation of cars producing greater downforce, there were early fears that, rather than producing more exciting racing, it would instead be more processional.

And so it transpired, with a grand prix that resembled a high speed parade more than a motor race.

"We have to reserve judgement until after two or three races," insisted Red Bull boss Christian Horner, whose driver, Max Verstappen, acted as a roadblock for Lewis Hamilton following the Mercedes driver's pit stop.

"Melbourne if you look historically, there's never been a lot of overtaking," Horner added. "Let's wait for China and Bahrain which are two of the easier circuits to overtake on before drawing any judgement."

Hamilton also waded into the discussion, lamenting his inability to follow closely enough to attempt a pass.

"Unfortunately it's harder than ever to get close to cars, which is a shame," the Briton explained. "We can't even have a close battle, but who knows, maybe in the future…"

"In the years before it's been difficult to follow once you get within one and half-a-second because of the turbulent air," added Valtteri Bottas. "Now, as more of the grip from the car is relying on the aero, it's a bigger effect and the cars are wider so I think there's more turbulent air now.

"It's more like two seconds or even two-and-a-half because you can actually feel quite a big effect from the car in front, and that way in the corners it's more difficult to follow," he added. "Obviously you have a bigger slipstream on the straight but if you can't follow in the corners it's tricky to get a slipstream. That's the problem."

Backing up the two Mercedes driver's concerns was the fact that, during the course of the Grand Prix' 57 laps, there were just five on-track passes and three of those came as a result of Jolyon Palmer suffering brake issues, with the remainder of positional changes the result of the pit stop cycle.

The three-way dice between Fernando Alonso, Esteban Ocon and Nico Hulkenberg isn't included since Alonso retired at the end of the lap, meaning the changes aren't scored as a pass at the finish line.