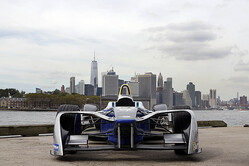 The FIA has today released the names of the nine manufacturers who have been granted the homologation for the 5th, 6th and 7th FIA Formula E seasons.

Season Five will represent a very important step in the development of the first FIA championship featuring single-seaters powered solely by electricity, because, as from the 2018-19 season, each driver will use just a single car per race, rather than the current two.

The number and the quality of manufacturers that has requested and obtained homologation for their powertrain for three seasons (from 2018-19 to 2020-21) is further confirmation that the championship is constantly growing and is proving very attractive both in terms of its audience figures and the partnerships it is attracting.

This round of homologations means that the powertrains will thus fall into line with the new cycle of homologation for the chassis and battery, which will remain standard up to the end of season Seven (2020-21.) Therefore, any new manufacturer wishing to homologate their powertrain will be able to do so for season 6, for a two year period and for the next one with an annual duration.

"The FIA Formula E Championship has been going for a little over three years now and already it has established itself as one of the most interesting and innovative race series, not just because of the actual format of the events but also and above all, because of its technical development," said FIA President, Jean Todt. "The homologation of the powertrains that will be used as from season 5 is a very significant step because it means the cars will be able to run for twice as long while, at the very least, maintaining the same performance level. This highlights how motorsport can stimulate and accelerate development of new technologies which can then be applied to road cars and in this case, it has even more of a key role, given that at the moment, electricity is one of the more practical alternatives when it comes to finding new forms of more sustainable mobility in the future."

"The mission of the FIA Formula E Championship is to act as a platform to advance the development of electric vehicle technology and alternative energy solutions," added Alejandro Agag, Founder & CEO of Formula E, "this hinges on the participation of automotive and component manufacturers. When we launched the series in 2012, we had forecast to secure at least three manufacturers by season Five. The news today has highlighted the number and quality of manufacturers joining the championship and tripling our initial expectations. This just goes to show the relevance of Formula E to the motor industry and as an attractive proposition to new audiences and commercial partners, such as the recent agreement with Allianz."

In the current season, the FIA Formula E Championship has made its debut in Africa with the Marrakech ePrix back on 12th November, has brought a motor race to the heart of the Hong Kong metropolis on 9th October last and it will do the same in New York City, which this coming 15th and 16th July hosts the first FIA-sanctioned open-wheel race to take place within its five boroughs.

Before then, the championship will also have run at historic racing venues such as Monaco and other major capitals, including Mexico City, Paris and Berlin, with the final round taking place in Montreal at the end of July.

The 2018/19 season will also see the debut of the new-look Formula E car, whose shape has been inspired and defined by the FIA with the aim of having a futuristic and appealing design. It will be produced by Spark Racing Technology, who won the chassis tender.

From season five there will also be a new standard battery, produced by McLaren Applied Technologies. According to Article 4.1.3 of the Registration Procedure, each manufacturer is aware that the FIA has selected these single suppliers for the batteries and the chassis and will have to enter into contract with both of them.