Sainz: You're only as good as your last race 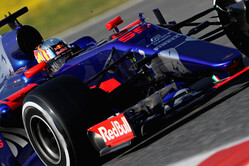 With a contract already in place for 2017, and Red Bull not known for its willingness to assist with the wishes of its rivals, it was never likely that Carlos Sainz was going to be allowed to fill Nico Rosberg's vacant berth at Mercedes following the German's shock retirement last year.

That said, speaking recently, Franz Tost said he had no doubt that the Spaniard would have survived alongside 'career killer' Lewis Hamilton.

"Do I think he would be good enough to survive alongside Hamilton? Yes," the Austrian told the official F1 website. "Carlos is a very skilled driver who on a couple of occasions was faster than Max (Verstappen). Carlos has a very high natural speed and he will shine if we are able to give him the right car."

Asked if he had dreamed of filling Rosberg's seat, the Spaniard admits: "It was not a dream, it was quite real, no? Mercedes called nearly the whole paddock to see the contract situations and I think that Red Bull was very clear with them what my contract situation is! So nothing really developed from there."

Minded of Tost's comment regarding him being able to 'survive' alongside Hamilton, Sainz told the official F1.com: "It is no secret that I try to be a world champion in the near future. To be that you need to beat people like Lewis, like Vettel, like Fernando... all the other guys in the top teams. I believe I am capable of doing that, I just need the right material.

"I am very thankful for Franz's positive comments," he adds, "I do appreciate them... and I agree with him!"

Asked about his expectations, he replies: "The team has expectations - the whole team. Every year we want to finish fifth in the championship, and this year there is a high chance, or a higher chance, because we do not have the disadvantage of the power unit as we had last season. I believe that the team has delivered the good chassis and aerodynamics from the previous years.

"Franz hasn't given me a target as a driver," he adds. "He expects me to deliver, but that I expect from myself.

"I really hope the Toro Rosso is as fast as it looks," he continues. "It is a real beauty and has caught the attention even from the big teams in terms of looks. Let's hope that it also behaves to match the looks. Over the last few years we've had a really good chassis but not the power unit to match it. Hopefully this year we will.

Having had a year-old Ferrari engine last season, this year Toro Rosso will have the same power unit as 'big sister', Red Bull.

"Yes, that will be nice," he admits. "Not to be the junior team but enter the premium class! But I don't say that we will fight Red Bull, Mercedes or Ferrari, but to be in the higher part of the midfield.

"Take last year: Williams and Force India battled for P4 - we want to join them because with a good engine our car is capable to do it. We just need to be lucky on the engine side."

Though he missed out last year, later this year a number of contracts run out, asked if this is something he is thinking about, Sainz admits: "It is something that I thought about last November, and I did an analysis and pictured it. But once the season gets started the only thing that helps you be in a good position at the end of 2017 is to push like hell!

"You are only as good as your last race and nobody will remember what you've done in 2016. When a contract arrives at the end of 2017 it is not thanks to my 2016 performance.

"This is a combination of decisions between Red Bull and myself, and a combination of interests. I still don't think about it! I swear I haven't thought about the end of the 2017 season. This season is so important - but it would be so stupid for me to think about the end even before it has started, or how I would approach Red Bull, if Ferrari arrives, or Renault arrives... or Mercedes! Because it is not going to happen unless I deliver this season."

So what of the season opener, in Melbourne?

"That is the weekend where you really see where you stand, where your true colour becomes visible," he admits. "Right now it is all expectations, theories... nothing real. If you put zero fuel in the car for qualifying in Australia, then you see.

"Good news is: I've always qualified well in Melbourne with probably the worst engines on the grid... so this should help! I'm keeping my fingers crossed!"