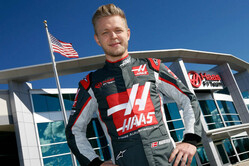 Haas is the ninth team to reveal the launch date of its 2017 contender, leaving Williams as the only team yet to make an announcement.

The American team, which surpassed all expectations in its debut season, even of team owner Gene Haas, finishing eighth in the standings ahead of Renault and Sauber, will unveil its car on Sunday February 26.

With the opening test kicking off next day, Sunday 26 is already looking busy with Red Bull and Toro Rosso both scheduled to take the wraps off their cars.

The 2017 Haas has been designated the VF17, and is to be driven by Romain Grosjean and Kevin Magnussen.