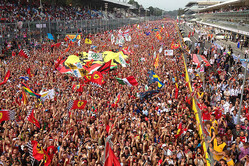 In all honesty we have been - and remain - somewhat sceptical of the numerous promises being made by Formula One's new owner Liberty Media.

If we believe everything we hear, pretty soon F1 is going be bigger and better than ever; a better spread of the prize money, meaning even the small teams can be stable and thereby competitive. Grands Prix are going to become 'go to' events, each round of the world championship like a mini Super Bowl. Not only is the sport going to listen to the fans, they can be put in the cockpit alongside their heroes courtesy of Virtual Reality. More spills, more thrills, more interaction, less rules, a return to the classic circuits and even - if we are to believe McLaren - a few retro liveries.

It's all too good to be true.

Then again, we are minded of the old joke about the marketing man who spends his honeymoon sitting at the end of the bed telling his new bride how good it's going to be.

Listening to Chase Carey and his various promises, in terms of Silverstone and the like, the question is how? After all, to make the numerous improvements we're being told about Liberty Media will have to invest heavily and it's already borrowed pretty substantially to complete the buy-out in the first place.

The appointment of Sean Bratches to head the sport's new commercial arm worries us, but we'll leave our fears of over commercialising and selling souls aside for now - after all , the sport's done a pretty good job of that itself over the years.

The one ray of light is the appointment of Ross Brawn who is to head the technical side of the sport for Liberty, after all, his is a name we are familiar with, a track record that speaks for itself. Ross is one of those who would have every right to wear an official F1 version of the 'been there, won that' T-Shirt.

Be it his success with Jaguar in Sportscars or F1 with Benetton, Ferrari and then his own team, Ross knows about Formula One, it is his DNA.

However, as a long time inhabitant of 'Planet Paddock', does Ross really understand what the fan in the stand wants, or those viewing the races on their TVs or tablets? Is Ross too much of a techie to understand what really excites the fans?

While he has admitted that the frequent rule changes have left him confused, this is only one of the many aspects of the sport that continues to frustrate fans.

At the same time, as witnessed with talk of McLaren's retro livery, fans of different ages have different expectations from the sport.

Just a day or two into the job, Ross has already admitted that, like the rest of us, he finds DRS to be a gimmick. However, he also warns that it is going to take three to five years for him to make his mark.

To help him on his way, we are inviting readers to make their suggestions as to what course you would like Ross to take, what changes would improve the sport not just for you but to encourage new fans.

Do you believe it is the job of the opposition to catch Mercedes - or whoever - in their own time, or should they be given assistance in the form of handicaps or the even infamous budget cap.

Do you believe 'customer cars' might be the answer or do you remain a purist. Indeed, as we call on the sport's new powers-that-be to give us back what we loved about the sport, what attracted us to it, what was it that caused you to fall in love with it in the first place.

This isn't a means of adding your details to our database in order we call flog you stuff you don't want or sell your details on, we genuinely want you to share your thoughts and ideas, knowing that they will be seen by those that matter.

According to Chase Carey and Ross, Liberty is looking to make F1 what it should be, what the fans want it to be, at this very early stage why not point them in the right direction.

For too long the sport has been arrogantly telling the fans what it insists they want, now is the time for fans to put the record straight. And as they say about elections, if you don't vote you have no right to criticise the result.

If you are registered with us, post your comments as ever, if you want to share your thoughts and ideas but don't want to register simply email me (click here) and I'll post them on your behalf.