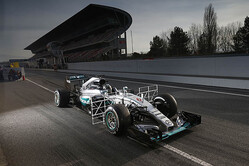 The FIA has announced details of this year's test programme.

As previously reported both pre-season tests will take place in Barcelona, the first running from February 27 to March 2, the second from March 7 to March 10.

The two in-season tests will take place in Bahrain and Hungary while once again Abu Dhabi will hold the post-season test.

Both the Bahrain and Hungary tests will take place on the Tuesday and Wednesday following the Grands Prix and as in 2016 teams will have to field drivers who have competed in less than 3 Grands Prix on two of the four allotted days.

While the in-season tests can be used for development purposes, the post-season test in Abu Dhabi is exclusively for tyre testing in preparation for 2018.

Pirelli has been given a December 1 deadline by which time it must submit its 2018 compounds, and once again the Italian manufacturer has been given permission to carry out its own test programme.

However, unlike last year when only three teams (Mercedes, Red Bull and Ferrari) participated in the 25-date programme, this year it is open to all the teams though it is understood that only eight have so far committed.

Once again, Pirelli has been given 25 dates for its programme which has yet to be announced.

News of the test schedule will come as a blow to Silverstone which, other than 2015 has regularly hosted a post-GP test.

The choice of the Hungaroring is odd in that most consider it a fairly unique, though technical and demanding, track often cited as Monaco without the buildings.