Rosberg: It is not going to be easy for him 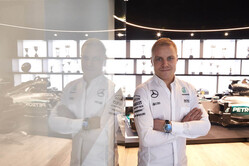 Whether, like Lewis Hamilton, we're going to have to wait ten years for 'the book' remains to be seen, but hopefully one day we'll get to hear what really happened at Mercedes as the rivalry between Lewis Hamilton and Nico Rosberg intensified, how bad it really got.

Attending a promotional event for IWC in Geneva, in his new ambassadorial role for his old employer and its sponsors, Rosberg admitted he is relishing watching the battle between Bottas and his former nemesis.

"I was informed of the announcement yesterday and I think it is great news for the team," said the German. "I am happy that they found a great solution quite quickly. I am sure he is going to do a really, really good job and he is going to blend in well.

"I am going to be sitting in front of the TV and watching the action and I look forward to seeing how Valtteri gets on, especially against Lewis," he continued, "because Lewis is an awesome reference point.

Formula One World Champion, and possibly a champion in understatement.