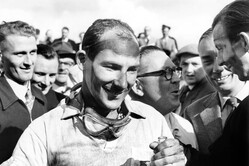 Motor racing legend Sir Stirling Moss has been hospitalised with a chest infection.

According to his family, the 87-year-old was hospitalised just before Christmas after suffering complications with a chest infection.

"Once he is discharged from the hospital, it is Sir Stirling and Lady Moss' hope to stay in Singapore to enjoy a few days recuperating at a lovely hotel, being thoroughly spoilt, whilst lying in the sun by a gorgeous swimming pool," said the family in a statement.

Sir Stirling, is "in good spirits" other than being miffed at missing out on a Christmas cruise with friends, while Lady Moss said the Singapore hospital where he is recovering is "second to none" and she could not wish for better care.

However, at a time when Grand Prix driver participated in other series, the Briton, who won 16 Grands Prix from 66 starts, won countless other events most notably the Mille Miglia and Targa Florio as well as finishing second in the Monte Carlo Rally and winner of his class in the 1956 Le Mans 24 Hour race.

Following a crash in 1962 at Goodwood, he was in a coma for a month, and for six months after that the left side of his body was partially paralysed.

Though he recovered he retired from professional motorsport after taking part in a private test in a Lotus 19 the following year, when he lapped marginally slower than he had previously. Feeling he no longer had the same instinctive feel for the car he opted to hang up his helmet.

Following the mantra 'you can't keep a good man down', over the years that followed he took part in numerous events including the 1974 World Cup Rally, the 1976 Bathurst 1000 and the Benson & Hedges 500 at Pukekohe Park Raceway in New Zealand in 1979.

In 1980 and 1981 he contested the British Saloon Car Championship with Audi, the second season seeing him partner Martin Brundle at Tom Walkinshaw Racing.

He continued to take part in various historic events also but in 2011, following qualifying for the Le Mans Legends race, he revealed that he had decided to finally retire having admitted that for the first time in his life he had scared himself.

In an age when the word 'legend' is thrown around all too frequently, Sir Stirling is a true legend, and even those who have never watched a moment of motor racing will be aware of his name, he is a true sporting icon.

We wish him a very speed recovery.