Silverstone working to save Grand Prix 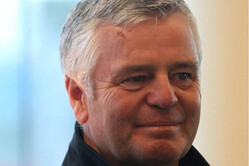 Speaking in Birmingham, British Racing Drivers' Club (BRDC) President Derek Warwick has sought to play down fears that Silverstone is to lose the British Grand Prix.

Fears for the race resurfaced earlier this month when the club's chairman wrote to members warning that the cost of keeping the event posed a "potentially ruinous risk".

Consequently, he warned that before this year's event, as required by its agreement, it is the club's intention to exercise the break clause in its contract with FOM at the end of 2019, which would effectively mean no race at Silverstone from 2020.

However, he admitted that this was one of a number of options as the club sought to keep the race, "but only if it makes sense to do so".

Speaking to race fans in Birmingham, Warwick was keen to allay their fears, insisting that talks are being held with various parties in an attempt to save the race.

"We sent a Christmas note to our members giving them an update," he said. "A lot of that came out as there was the possibility of activating the break clause before the Grand Prix this year, for 2019.

"We have had meetings with Liberty and Chase Carey," he revealed, "he understands our dilemma. We understand he still has to make money because that's what these guys are doing.

"There is light at the end of the tunnel, we will have grands prix past 2019. We're talking to the government to see if there is any help there. Even Bernie is calling us and saying 'let's set up a meeting and we'll talk about it'.

"We are feeling very positive at the minute," he claimed. "There are a lot of good things happening at Silverstone like World Rallycross, MotoGP, WEC, British Superbikes and Classic. Of course we're a bit short of cash, we would like to resurface the circuit and so on. We are still looking for something out there."

The news comes a day after Jonathan Palmer's Motorsport Vision added Donington Park to its ever growing roster of circuits, clear proof that track owners can make money if the business is well run and impossible deals are not entered into.

And at a time of increasing cuts, when the NHS is in crisis, no government will want to be seen handing cash to a sport as frivolous as F1.