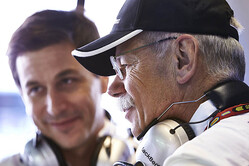 Though he has helped Mercedes win successive titles, it's fair to say that Lewis Hamilton's time with the German team has not been without its moments.

Whether clashing with his teammate on track, suggesting there is a conspiracy against him within the team - only to deny it but subsequently claim all will be revealed in 'the book - or (not) trashing a hospitality suite in a fit of pique after crashing out of qualifying in Baku, the Briton certainly keeps the Brackley outfit, and particularly its PR department, on its toes.

Indeed, Mercedes chairman Dieter Zetsche has revealed that when he received the phone call from Toto Wolff to inform him of Nico Rosberg's decision to quit, he initially thought Hamilton was in the headlines again.

"I saw it was Toto and I thought, 'oh again, something with Lewis!' But then I got the news. And I did not expect that, I must say.”

Though disappointed to lose Rosberg, Zetsche respects his countryman's decision.

"I respected that decision. I mean, obviously, one is saying 'I want more and more and I want to break more records and make history'," he said, referring to Hamilton, "and the other one is saying 'well, I finally fulfilled my life dream and what can be on top of that?', and both approaches are legitimate.

"Of course, it would have been easier and more pleasant for us to have two world champions in our team for the season to come, not necessarily less fight but this was part of the entertainment, and now we need a new driver and that's how life works. And so I was not insulted or totally disappointed. I respected his decision."