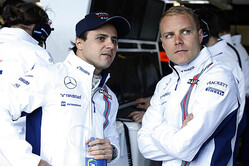 In terms of referendums and elections 2016 has already provided more than enough shocks, and then there's the seemingly endless roll call of legends who have been taken from us, many of them way before their time.

Formula One hasn't escaped either, first there was the shock retirement of Nico Rosberg just days into his reign as world champion and now talk of Felipe Massa returning to Williams.

While it was only two weeks ago that the German dropped his bombshell, just days earlier we had waved a tearful farewell to Felipe, the popular Brazilian given a moving guard of honour in the Interlagos pitlane - during a race - and subsequently given his race car as a parting gift from his team.

It's no secret that Massa, unlike Jenson Button, did not want to retire and did not go gentle in to that good night that is WEC or IndyCar.

Then, as Mercedes continued its hunt for a replacement for Rosberg, attention appeared to shift to Valtteri Bottas, though Williams was quick to post a 'not for sale' sign around his neck.

However, with Mercedes offering all manner of incentives, and Williams not averse to having its palm greased, the mood appears to have softened. And now, a story which at first appeared fanciful appears as though it might have legs.

While Mike Lawrence recently suggested that Massa would make a good teammate for Hamilton at Mercedes, the most likely scenario is that Bottas heads to Brackley and is replaced by his own former teammate.

Speaking to BBC Sport, Claire Williams has admitted that should the right replacement become available, contrary to previous comments, the Grove outfit would be willing to release Bottas from his contract.

"I'm delighted to see that a team like Mercedes lists Valtteri as a potential replacement for Nico," she said. "We have always known Valtteri is one of the sport's key talents and are proud that the championship leaders recognise this.

"However, Williams has its own ambitions and we must always ensure we give our team the best opportunity to move forward. Any changes would only be made if Williams remains in a strong position to compete and develop in 2017.

"If we did allow Valtteri to leave, we would only do this if an experienced, credible alternative was available, such as someone like Felipe Massa, for example. Whatever we decide, it must be in the best interests of this team."

Though Massa had a somewhat hit and miss season, he still has fire in his belly and would make a great mentor for rookie 'teammate' Lance Stroll.

Then, as ever, there is the question of money... the lifeblood of the sport.

In taking on Stroll, and despite the denials, Williams has made clear that it does have financial issues. While Mercedes is understood to have only offered a discount on its engine package before, the German manufacturer might now be persuaded to up its bid, especially as it no longer has to meet Rosberg's financial demands.

Indeed, despite Mercedes announcement today that no announcement will be made until January, one does not have to hold Williams comments up to too much scrutiny to surmise that a deal is close to being done. Much like Friday practice sessions, the Grove outfit is giving little away, keeping its cards close to its chest… but the intention is clear, it looks ready to play.