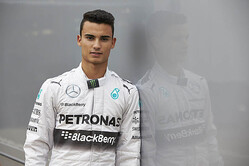 Pascal Wehrlein admits to holding off on contacting Mercedes for Rosberg's seat.

We've all done it; opted not to make that phone call or send that email for fear of annoying the other party and losing out.

Now, Pascal Wehrlein has admitted to being like the rest of us, revealing that he has held off on contacting Mercedes about its driver vacancy for fear of being seen as pestering the team and thereby losing out.

While never entirely convincing at Manor, be it alongside Rio Haryanto or Esteban Ocon, the German raised his game in the closing stage of the season, even scoring the point that looked as though it might secure tenth in the team standings.

Having lost out to Ocon in terms of the Force India seat alongside Sergio Perez, until last Friday the youngster's hopes looked to rest with either Sauber or another season at Manor... then came Rosberg's shock announcement.

With all his major rivals already locked in to contracts for next season, in the eyes of many Wehrlein must be at the head of the queue however the German admits that he is not one of the many drivers to have inundated Toto Wolff or Niki Lauda over the weekend.

"The team knows I would love to drive for them, the tests I did were great," he told Autosport. "But I cannot call them every day to say 'what's happening?' I don't want to be annoying.

"I'm there if they think I'm the right person for the team," he continued. "I will do whatever I have to do and whatever is necessary to deliver. I just have to wait now."

Admitting that he spoke to Wolff at Saturday's celebratory event at Mercedes facility at Sindelfingen, the youngster admits that the Austrian was giving little away.

"There is no news at the moment, but as expected every driver is calling him," he said. "Everyone wants to grab this unbelievable opportunity to join the Mercedes team. I understand they want to go for the best option, that they want to have a bit more time, or the time they need to decide which one they think will be the best one for the team."

Of his own chances he said: "One season in F1 is not a lot but I learned all the tracks now and I learned how the tyres are working," he said. "I feel like I've had a strong season and I'm ready to make the step up. There is still a lot to learn for me but I'm happy with the progress I'm making.

"It's important for me to know I'm not on my limit now," he insisted. "I haven't reached my limit, there is still a lot of time coming. After this year, I definitely I feel ready."

Check out our Sindelfingen gallery, here.