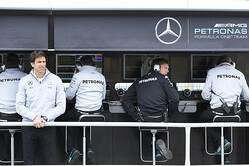 Even as it registered, that the new world champion had quit the sport without attempting to defend his title, the big question on everyone's lips was who would replace him.

Naturally, thoughts immediately turned to Max Verstappen however, like teammate Daniel Ricciardo he is locked into a watertight contract with Red Bull, besides which both drivers must fancy their chances with the Austrian team challenging Mercedes next season.

Next up come Sebastian Vettel and Fernando Alonso, though both are also locked into contracts, with Ferrari and McLaren respectively.

Though the thought of a drive in the Mercedes must be enticing, certainly compared to what they have now, should either even attempt to leave their current berths it would be a massive blow to the team involved; Ferrari fires winners, they don't walk out... unless your name is Surtees.

Even so, Toto Wolff claims that he has no intention of offering the job to either Vettel or Alonso, for while he has no problem phoning Jos Verstappen in an attempt to get Max not to interfere in the title fight, the Austrian insists he would never try to poach a driver from a rival team.

"It's not my intention to interfere with Ferrari's internal issues," he told Gazzetta Dello Sport. "Besides, I don't even know if Sebastian really has the intention to come to us.

"It's the same thing with Alonso," he continued, "what would Ferrari and McLaren do without Vettel and Alonso in December? Or Williams without Bottas? That option is the one I like the least."

While he might be loath to go looking for a driver, prospective pilots eyeing one of the most desirable seats in F1 haven't been backward in coming forward.

"I've been bombarded with phone calls," admitted the Austrian. "I've been called by 80% of the F1 drivers."

Asked who hasn't called, he admitted: "Raikkonen and Kvyat, just because they don't have my number!"

With proteges Pascal Wehrlein and Esteban Ocon looking the most likely, even though the Frenchman has signed for Force India, Wolff is still torn between giving a chance to one of his junior drivers or signing someone with more experience.

"The first way is to consider having a number one and a number two," he said, "a bit like Ferrari during the Schumacher and Massa era. That is, hire a driver that guarantees points for the constructors' championship.

"The second hypothesis is to promote our young drivers, Ocon or Wehrlein," he continued. "After all, other teams have given a chance to youngsters like Verstappen and Vandoorne.

"The third way is to get back on the market in order to find another top driver," he admitted. "On Monday I will be in Brackley and I will a have meeting with Ron Meadows, Andrew Shovlin and a group of top-level engineers, and we'll start working to find the best solution.

"It's a new and exciting challenge. After all, even if we have won 19 races, this has been a really complicated season, full of hurdles."