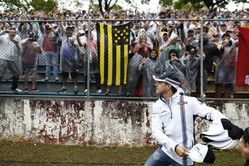 The promoter of the Brazilian Grand Prix is confident of finding another world class event should the F1 Grand Prix be lost.

With the Brazilian Grand Prix one of three events on the provisional 2017 F1 calendar still 'subject to confirmation', the promoter of the event has said he can live without F1 and will not lose sleep if it is dropped.

Speaking last week Bernie Ecclestone said that Canada, one of the three doubtful events, appears safe, while there remains serious doubt over Brazil and Germany.

Asked if he would bet on Brazil taking place in 2017, he told Motorsport.com: "I wouldn't put my money on it, I might put yours."

Prior to the Grand Prix, Ecclestone met with President Michel Temer in Brasilia, the President only having taken office in August. While there was no subsequent press conference, it's believed that Ecclestone called on the President for government backing for the event, though he denied this.

While promoter Tama Rohonyi believes the race, popular with drivers and fans alike, will be on the calendar when it is confirmed later this month, if it is dropped it will not be the end of the world.

"People come to Interlagos because they are petrolheads and once a year, they want a big international race," he told Autosport.

"I'm in the business of running international motor races and if I can't run F1, which I have been running for 42 years… it's like if Pavarotti dies, you get another singer," he continued. "You have an opera house and you have to fill the seats so that's what I'll do. I don't lose sleep over that."

Citing the current economic situation in the country, he said: "We lost important sponsorship by state companies, the state bank, the oil company, the state trading company and even Shell, which used to be a big client here, but I'm confident we'll be OK."

Recently elected mayor, Joao Doria, who is due to be sworn in on January 1, is known to be a keen fan of the event and is seeking to extend the contracts

"The only way to bring this to a conclusion is to extend the contract to 2028 or 2024," said Rohonyi. "I would imagine 2028 will be the target because we have to mobilise so many companies, so many people and so many political clubs. All these people will say, quite logically, 'we'll put our weight behind this but let's do long-term'."

With Felipe Massa retiring next week and Felipe Nasr yet to secure a drive, Brazil could be facing the first full season of not being represented on the F1 grid since 1969.

Nonetheless, Rohonyi insists this would not impact attendance at Interlagos come race day.

"We get around 55,000, the country has 200 million people so I think it's reasonable to assume there are 55,000 people who are so mad about F1, they will still come and see the greatest drivers," he said.