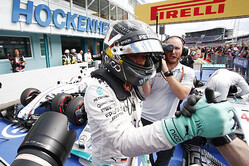 Bernie Ecclestone has said that the future of the German and Brazilian Grands Prix remains in doubt.

When the 2017 calendar was issued in September, the two events, along with Canada, were accompanied by an asterisk signalling that the events were "subject to confirmation".

While the Montreal event looks to be secure - perhaps Lawrence Stroll has bought everyone a ticket - F1 supremo Bernie Ecclestone insists the other two races are in doubt.

"I think we're sorting out Canada, which has been a bit of a pain," he told Motorsport.com

Asked if he would bet on Brazil taking place in 2017, he replied: "I wouldn't put my money on it, I might put yours."

Ahead of this weekend's Grand Prix, Ecclestone met with President Michel Temer in Brasilia, the President only having taken office in August.

While there was no subsequent press conference, it's believed that Ecclestone called on the President for government backing for the event, though he denied this.

"I didn't ask him. I just wanted to meet him and see how he felt, about things in general," he said. "Did he think that F1 was good for Brazil, or not? It's probably been good for Sao Paulo. Whether it's been good for the rest of Brazil, who knows? I've no idea what he can do as the president. This country is very political at the moment. He's just stepped in.

"They spent a lot of money to have the Olympics and the World Cup," he continued, "and Sao Paulo hurts a little bit, the promoter trying to run this race, and make a profit, or not make a profit, but not lose. So in the end the people who lose are us, because they can't pay us."

Despite the upgrades to the track and its facilities, Ecclestone remains distinctly unimpressed. "It should have been done four years ago," he said, "our contract with them was it should have been built then."

"Germany? I don't know how we could ever save that race," he admitted. "It's commercial. What is incredible is that we've had all the German world champions, Mercedes have won the constructors' championship, and will win the drivers' championship for sure, and there's no interest in Germany.

"There's nobody at the Nurburgring," he continued, "the current owners, when they bought it, they had no idea what was going on. When they found out, they didn't like what they heard. I met them, they're Russian. So that went. Hockenheim's always been the same, it's never really been supported, when it should have been."

While Hockenheim is willing to host the 2017 event, organisers are unwilling to meet FOM's financial demands.

"They're saying, or I think they're saying, 'we'd be prepared to continue with the same terms and conditions that we've had for the last two or three years'. Which are no good for us. We tried to keep them alive, but they've run out of tablets.

"I'll put my money on it not happening," he admitted. "I'll have to talk to them in the next couple of weeks."

Asked if the forthcoming meeting of the World motor sport council is effectively the deadline for the events in Brazil and Germany, he said: "Yes, absolutely".

Were this to happen, the calendar would return to 19 races, however Ecclestone said that there might be alternatives for 2018.

"There are events we can resurrect, and people who've been talking about it and we haven't been able to do anything," he said. "Probably not for next year, but the year after, for sure."