Stroll: I earned this 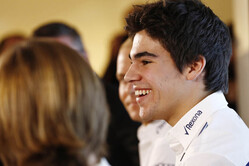 Lance Stroll has dismissed claims that his rise owes more to his father's money than talent.

While there is no doubt that Lawrence Stroll's fortune has helped his son Lance's career, the youngster totally dismisses claims that it heped secure his seat at Williams, insisting that he has earned his seat in the pinnacle of motorsport.

"Everyone has their own opinion, and I can't change that," he told reporters at Grove today in response to claims that some will surely argue that his place on the 2017 grid owes a lot to his father's wealth.

"I come from money, I am not going to deny that," he continued. "But I believe I have my shot in F1 because I won every championship I competed in. I won F4, I went to New Zealand and won the Toyota Racing Series, and I won the F3 European championship in 2016.

"Now the FIA has put in a superlicence for just that reason because people cannot just buy their way in to F1," he added. "You have to prove yourself and win in junior categories, and that is all I can really say about that. I don't want to say exactly when I will be able to show that I am not just here for money, because it depends on so many other things, and so many details coming into place. But I am just going to worry about my business and I am here today very happy to be joining Williams and I am looking forward to next season."

"I know there has been a lot of commentary about Lance's background," said Claire Williams, "and I would like to make it very clear to everybody that Williams has been a team over the past few years that has made it very clear and a statement of intent that we would not allow financial considerations to influence our driver choice. And that is absolutely the case this year.

"Money doesn't drive performance in the cockpit," she added. "You either have the talent or you don't, and I think that Lance has proved that he's got that talent and he's done what he's done in order to earn his race seat."

That said, reputable sources claim that while Stroll's seat is not a 'pay drive', Lawrence Stroll has paid around $80m ($64) preparing his son for the F1 grid.

The youngster then went on a test programme at a number of race tracks including Monza, Hungary, Austin, Barcelona, Abu Dhabi and Silverstone in a 2014 Williams with a crew that included 5 Mercedes engineers - two of the German manufacturer's engines having been purchased in the process - and twenty other staff members.

Despite his age, ahead of his debut, Lance Stroll has spent more time and driven more miles in an F1 car than any 'rookie' before.