Williams to celebrate 40 years in F1 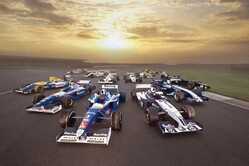 On the 8th of May 1977, at the Circuito de Jarama, Patrick Neve finished 12th in a March 761 to mark the start of something special… the birth of Williams.

Little did anyone know that 40 years down the line Frank Williams, a man brought up in the humble surroundings of Jarrow; and an automotive engineer by the name of Patrick Head, would have constructed a team that boasts 114 wins, 128 pole positions and 133 fastest laps, culminating in nine Constructors' and seven Drivers' Championship titles.

2017 marks 40 years of Williams and to celebrate the occasion and to demonstrate its gratitude to everyone who has supported it over the years, the Grove outfit has a series of events planned for its fans, partners, media and many friends in the paddock, in addition, to mark the occasion next year's car designation will be the FW40.

"40 years ago Frank and Patrick created what would become one of the most iconic teams in the history of Formula One - Williams," said Claire Williams.

"We are immensely proud of what we have achieved during our long and illustrious history. We have experienced the most euphoric highs - reaching the pinnacle of the sport nine times as a Constructor and created seven Champion drivers; Alan Jones, Keke Rosberg, Nelson Piquet, Nigel Mansell, Alain Prost, Damon Hill and Jacques Villeneuve. We have also experienced the lows; the heartache that the sport can cause and victories that have agonisingly slipped away.

"So much has changed in Formula One in the last 40 years but one thing remains the same, our passion for motorsport. We want to celebrate our passion, our achievements and our heritage with everyone who has made this journey possible - our fans, partners, media colleagues and the many friends we have made over the last four decades. Racing, it's in our blood, it's our DNA and has been since 1977. We are proud of that and that will never change."