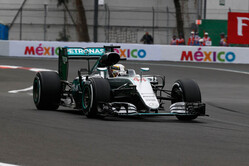 It's fair to say that this morning's final practice session only served to further confuse matters.

While Nico Rosberg closed the gap to teammate Lewis Hamilton, both were out-paced by Max Verstappen, the German finishing fourth behind Ricciardo also.

Indeed, Rosberg's pace is one of the big mysteries, he has been consistently off his teammate's pace in all three sessions, but is this genuine or is he merely keeping his powder dry. Then again, with a 26 point advantage, the onus is on Hamilton.

Ferrari didn't quite carry over the pace from yesterday, though both were within 0.8s of Verstappen's pace.

Both Williams were in the mix, particularly Valtteri Bottas, while local hero Sergio Perez was out-paced by his Force India teammate. Indeed, the Silverstone outfit was under pressure from a revived Toro Rosso.

The plain fact is that grip is an issue with everyone struggling on all the compounds. Another major factor, and one which will play a part in Q1, is traffic.

Though the soft and supersofts are seeing drivers improving their times on their second flying laps, the traffic, particularly in the Stadium, are negating those potential improvements.

Consequently it is still wide open, though surely few would bet against Mercedes and in particular Hamilton.

A driver already worried about his place on the 2017 grid is destined to start from the back of the grid tomorrow, Renault revealing that Jolyon palmer will not take part in this session after damaging his chassis this morning.

"I won't be taking part in Quali after we found a crack in the chassis," confirmed the Briton. "Big shame as we were 14th in FP3 and aiming for Q2 again."

Air temperature has increased to 17 degrees C, while the track temperature is 47 degrees. It remains cool but nice and sunny.

The lights go green and Gutierrez leads the way, followed by Ericsson, Magnussen, Grosjean and Wehrlein. All are on supersofts.

Gutierrez reports that his tyres are not ready for a flying lap on what would have been his first flying lap, he is informed that Grosjean has reported a similar issue. Indeed, the Frenchman posts 27.544 and Gutierrez 29.430, while Kvyat goes quickest with a 21.454.

A mistake as he enters the Stadium sees Grosjean fail to improve, he heads back to the pits.

The crowd erupts as Perez heads out, meanwhile Sainz posts 21.100 to take the top spot. However, he loses time behind Sainz who is on his cool down lap.

That said, on his first flying lap Hamilton goes quickest in the first two sectors, finally crossing the line at 19.970 to demote Hulkenberg.

Perez improves to second but he and Hamilton are then demoted when Vettel posts 19.865 to go quickest.

Rosberg can only manage seventh, the German stopping the clock at 20.396.

Rosberg improves to sixth (19.996) having gone quickest in the second sector. However, Ricciardo crosses the line at 19.713 to split the Ferraris.

A massive lock-up for Bottas as he seeks - and obviously fails - to improve on eighth.

With under four minutes remaining, Ericsson, Grosjean, Nasr, Ocon and Gutierrez comprise the drop zone. Another poor session for Haas.

Toro Rosso reveals that Kvyat's issue is terminal, he will play no further part in qualifying. He is currently sixteenth, just outside the drop zone.

Gutierrez improves to fifteenth with a 21.401 but is it enough?

Ericsson also improves, the Swede going twelfth with a 21.062, which pushes Button down to fifteenth.

A mistake sees Gutierrez spin at T9, the Mexican right on the cusp in 16th.

Grosjean is still complaining. "I don't know what is happening with the car," he moans. "Yeh, OK," is the weary response.

The green light signal the start of Q2, and Hamilton is first out, the Briton now on the soft rubber.

Rosberg, Bottas and Wehrlein follow, the former on the yellow-banded rubber also.

"I've got a small vibration on my front tyres," reports Hamilton.

As more cars head out there's a good mixture of softs and supersofts.

"The clutch is very poor out of the box," says Raikkonen.

Hamilton goes quickest in all three sectors to go quickest (19.137), but no thanks to serial complainer Vettel who blocks the Briton in the final corner. "I got blocked by Vettel," says the Briton. "That was a clear block."

Vettel goes second ahead of Rosberg and Raikkonen as Perez goes sixth ahead of his teammate.

Verstappen posts an 18.972 the first driver to break into the 1:18s this weekend.

Rosberg remains well off the pace, 0.789s, and down in fifth, just behind Ricciardo.

The Red Bull duo are on the supersofts as opposed to the Mercedes and Ferrari duos who were on softs.

As Raikkonen heads out again on supers, Vettel asks: "Are we safe?" Told he is safe, he asks "Can I go for a wee?" Wonder if he's been watching Marathon Man.

On the supers, Raikkonen fails to improve in S1, he subsequently backs off.

While the top four have settled for their times, Rosberg is also back on track, still on softs.

Like Raikkonen, Rosberg has a poor opening sector and opts to back off.

Button goes tenth but is demoted when Bottas posts 19.958 to go seventh, teammate Massa goes ninth with a 2.151.

Hulkenberg improves which is bad news for Alonso and indeed local hero Perez who can only manage 12th (20.287) following a mistake in T2.

Ahead of Q3 it's worth noting that the Red Bulls will start tomorrow's race on the softs as will Rosberg.

The lights go green and Hulkenberg leads the way, followed by the Mercedes duo, Raikkonen, the Williams and Sainz.

All ten are on track as Sainz is warned of a cross wind.

As they exit the Stadium to begin their flying laps, the Mercedes duo slow to a crawl in order to create a gap.

Ricciardo posts 19.210 to take provisional pole but this is soon beaten by his teammate who posts 19.092.

Hamilton crosses the line at 18.704 having only been quickest in S1. Rosberg can only manage fourth (19.263), again he's around half-a-second off the pace.

All ten return to the pits to prepare for their second runs.

"How was the lap," Verstappen is asked. "Not great," he replies. Not great? He's second, just 0.388s off the pace. Teammate Ricciardo admits he lost a little time behind Vettel.

Hamilton heads out to get the final phase underway, last out is Massa.

"We advise lap two," Hamilton is told, which is pretty self-explanatory.

In the first sector the Red Bulls and Bottas can only manage 27.5, well off the pace. Not a sign of a PB far less a purple. Could this be down to the track temperature having risen.

Ricciardo goes quickest in S3 and improves but remains third while Hamilton also fails to improve despite being quickest in S3. Nonetheless he holds on to provisional pole.

Hulkenberg leapfrogs the Ferraris, Raikkonen appearing to have encountered a late engine issue. "Why don't I have full speed?" asks the Finn.

"Horrible, horrible," is all teammate Vettel can must.

So, was Rosberg sandbagging, that's the big question, and if so why?

So, Hamilton will start from pole ahead of Rosberg, Verstappen, Ricciardo, Hulkenberg, Raikkonen, Vettel, Bottas, Massa and Sainz.

With the Red Bulls starting on the softs, Verstappen and Ricciardo will be seeking to nail the Mercedes duo - and one another - and that long run to the first corner should be a thriller.