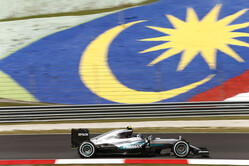 According to the New Strait Times, a special meeting is to be held with the major stakeholder in the Sepang International Circuit which first hosted a round of the world championship in 1999.

It is claimed that as hosting fees continue to rise 10% year on year, ticket sales have declined since 2014, sales consistently falling by 10%. By contrast, Moto GP consistently sells out, with this weekend's event expected to attract 90,000 spectators.

"When we first hosted the F1 it was a big deal," tweeted sports minister Khairy Jamaluddin. "First in Asia outside Japan. Now so many venues. No first mover advantage. Not a novelty.

"F1 ticket sales declining, TV viewership down," he continued. "Foreign visitors down because can choose Singapore, China, Middle East. Returns are not as big.

Meanwhile, Razlan Razali, chief executive at the Sepang International Circuit, claims this year's TV viewing figures of the race were the "worst in its history".

"Maybe it will do Malaysia good to take a break," he said. "I think the product is no longer exciting, it’s being dominated by one team."

While admitting that there is a "watertight" contract to hold the race until 2018, Razlan insisted that a meeting has been convened to decide its future.