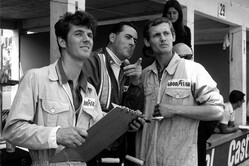 Following claims last week that his contract at McLaren may not be renewed at the end of the year, Ron Dennis remained the centre of intense speculation for much of the United States Grand Prix weekend.

Unable to raise the necessary funding to buy out his partners, who between them own the remaining 75% of the company, many feel that the Briton's days with the team are numbered.

Ironically, this comes at a time Dennis celebrates the fact that it is 50 years since he first attended a Grand Prix, when as a 19-year-old he flew out to Mexico to work on a fifth car entered by Cooper for local hero Moises Solana.

Leaping to Dennis' defence in Austin was a man who has seen off more than his own fair share of rebellions and Machiavellian plots, Bernie Ecclestone.

"If I was going to run a team I'd like to have Ron with me," he told Reuters. "I think he does a good job.

"Anyone that chucks him out is stupid," he continued. "He's dedicated.

"I think we ought to try and support him so they don't get rid of him," he concluded.