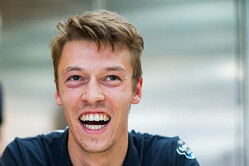 It is fitting that as the F1 circus pitches up at one of the most undulating tracks on the calendar, a driver who has enjoyed a roller-coaster season finds himself back in the headlines.

Daniil Kvyat, who not that long ago looked to be heading towards a career in IndyCar or Formula E, is being linked with the second seat at Force India.

In the wake of Nico Hulkenberg's departure to Renault, the seat alongside Sergio Perez has been the subject of much speculation especially as the Silverstone-based outfit looks set to finish fourth in the standings this year.

Until now, Pascal Wehrlein appeared the most likely contender, the move eased by a possible deal which would see Mercedes offer Force India a discount on its power units.

However, it is understood the team is not interested in the German, who has previously tested for it, but rather Esteban Ocon who until now has been linked with Renault.

To further complicate the issue, Jolyon Palmer, who has also tested with Force India, is also said to be under consideration.

As for Kvyat, following his demotion to Toro Rosso in favour of Max Verstappen, the Russian went through a difficult period when it appeared nothing would go right leading some to believe he might even be replaced before season end.

However, in recent races the youngster has rediscovered his form and even begun out-performing his teammate, Carlos Sainz, another driver clearly frustrated by Red Bull's 'pick 'n' mix' approach.

Red Bull motor sport advisor Helmut Marko has denied claims that a decision has already been made to drop Kvyat, Pierre Gasly's alleged claim that he was to replace the Russian in Singapore not helping the situation.

As he demonstrated in China, Kvyat has the talent and the attitude to succeed and perhaps the confidence and ‘family’ that Force India might offer is what the Russian really needs.

Furthermore, in terms of the new rules for next year, and the pressure to defend its place in the standings, the Silverstone-based outfit is likely to want the services of an experienced driver as opposed to a relative rookie.