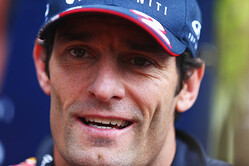 Mark Webber has announced that he will retire at the end of the current WEC season.

The Australian, who won nine Grands Prix in a career that stretched twelve seasons, made his debut with Minardi in 2002, the Australian scoring world championship points on his race debut, taking the Asiatech powered car to an emotional fifth.

From Minardi he moved on to Jaguar, then Williams, before heading back to the team that Jaguar had morphed in to, Red Bull.

Over the course of seven seasons with the Austrian team he finished third in the drivers' standings three times.

Following a difficult pairing with Sebastian Vettel, Webber quit F1 at the end of 2013 heading to WEC with Porsche.

Finishing ninth in the standings in 2014 a year later he won the WEC title, finishing second at Le Mans - scene of his horror crash in 1999 with Mercedes.

Webber, who will have his last WEC outing next month in Bahrain, will continue to be involved in motorsport as a Porsche special representative.

"We cannot underestimate the huge contribution that Mark has made to the WEC, both on and off track," said Gerard Neveu, CEO of WEC. "From the moment he joined Porsche and our paddocks in 2014, he completely embraced all the FIA WEC has to offer and he has never given less than 100% in everything he does. He has been a superb ambassador for endurance racing, and we shall miss seeing him on a regular basis. We hope he will often be back to see us for fun instead of work!"

"Mark stands for everything what Porsche implies," added Oliver Blume, Chairman of the Executive Board, "sportsmanship, power of endurance, straightforwardness and focused work for success. He is full of beans and always a thoughtful listener. I want to thank Mark for his great performance in the World Endurance Championship and am pleased he will remain tightly connected to Porsche in the future."