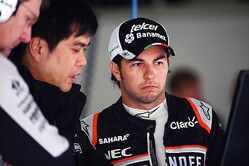 Sergio Perez: "I enjoyed myself today and I feel we made all the right decisions during the race. The start was good fun - I had a clean run going into turn one and ended up in third place. I tried my best to hold on to the position, but I knew it would be difficult to keep some very quick cars behind me so I needed to be sensible and choose my battles. Our car was very quick today and the two-stop strategy was definitely the correct one for us. It meant we needed to overtake the Williams cars on the track because they were on a different strategy, but fortunately I could make the moves on them very quickly. The end of the race, after all the pit stops, was just a case of looking after the tyres and keeping out of trouble. We scored some very useful points today - we need to keep doing the same in the final four races."

Nico Hulkenberg: "I am quite happy with my race: seventh would have been possible, but I paid the price of not having an ideal qualifying session yesterday. I had a good first lap, but when you start from the back of the top ten, you have a lot more traffic to deal with and that cost me some time. The pass on Valtteri [Bottas] was the highlight of my race. I had lined up a pass the lap before, but didn't get a good exit from the final corner and I missed out in turn one; so I told myself "if I can't get you here, I'll get you at the chicane instead!" I pulled the move off nicely; it was a close wheel-to-wheel battle. It was important to finish with two cars well inside the points, but we know every race and every point will count from here onwards because the battle in the championship will go down to the final race. It's going to be good fun and it's a nice challenge."

Robert Fernley, Deputy Team Principal: "We leave Japan feeling satisfied with our performance across the whole weekend. We qualified well, which allowed us to execute the optimal two-stop strategy with both cars. Seventh and eighth was the most we could realistically hope to achieve given the reliability of the cars at the front of the field, so it's rewarding to bring home ten important points. It was very enjoyable watching Checo and Nico involved in several close fights in the early laps. They pulled off some exciting moves - which were very important because they enabled the strategy to play out in our favour. With four races to go, we must maximise our potential at every event because there's still a long way to the end of the season."