Grid penalties for Button and Raikkonen 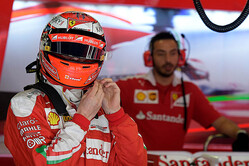 Kimi Raikkonen's hopes of challenging the Mercedes duo have taken a major hit after his team opted to change his gearbox.

"The gearbox has been replaced with the approval of the FIA technical delegate following a written request from the team concerned (requested on 09 October 2016 at 09:04 hours), this being in accordance with Article 34.2 of the 2016 Formula One Sporting Regulations," said the official FIA statement confirming the penalty.

"The gearbox change was before the six consecutive Events expired. Therefore this is not in compliance with Article 23.6a of the 2016 Formula One Sporting Regulations."

Meanwhile, in what it terms a strategic move, Honda has opted to change the engine on Jenson Button's car.

While teammate Fernando Alonso has the latest spec engine available, Button was still using the previous spec, Honda not wanting to incur a penalty at its home race. and preferring to take the hit in Austin.

However, with the Briton unhappy with his car and having qualified seventeenth, the decision was taken to change his MGU-H, MGU-K, turbocharger, control electronics and energy store resulting in a 35-place grid drop.

The Briton will also have the updated engine block that Alonso is using, for which Honda was given back a token as it is seen as a reliability improvement as opposed to performance.