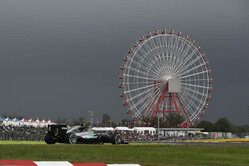 Mercedes driver Nico Rosberg has claimed pole position for the Japanese Grand Prix, setting a time of 1m30.647s on the soft tyre: the fastest time of the weekend so far that was around two seconds faster than last year's pole.

Two stops seem set to be the most probable strategy for the grand prix tomorrow, although this will depend on track and weather conditions. Following some overnight rain, qualifying remained completely dry; however damp conditions at the start of FP3 meant that the Cinturato intermediate and full wet was also briefly used today - meaning that all five tyres were run.

Everyone used just the soft tyre from Q2 onwards. In Q3 the drivers did two runs (apart from Force India and Haas), timing the final laps for the very end of the session in order to benefit from track evolution.

Tomorrow is expected to stay dry but the possibility of showers remains, with similar track temperatures to the 26 degrees centigrade seen today.

Paul Hembery, Pirelli motorsport director: "Track temperatures were cooler than they had been yesterday, which affected tyre behaviour, along with the overnight rain that washed whatever rubber had been laid on the track yesterday away. The superior speed of the soft tyre meant that it was the automatic choice for qualifying and so the top 10 will all be starting on this compound tomorrow. Where they go from here in terms of strategy will be very interesting, with the whole field closely matched in terms of speed and the possibility of cool and variable weather."

Hard: Used by two drivers at Q1 start as an installation. Mandatory set for the race.

Medium: Mercedes and Red Bull got through Q1 with medium only, not used thereafter.

Soft: The most popular tyre choice for Suzuka, with a 1.3 second per lap advantage.