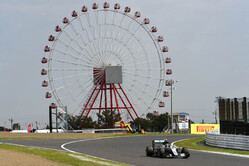 At the very start of the Japanese Grand Prix weekend, Suzuka is usually 'green' and slippery: today was no exception as the drivers got to grips with the three nominated compounds at one of the most demanding venues of the year.

There was very little rubber on the track during FP1, where Mercedes driver Nico Rosberg led home his team mate Lewis Hamilton on the soft tyre. The same pattern was repeated in FP2 with Rosberg getting his time down to 1m32.250s.

The afternoon session took place in track temperatures of 33 degrees, with the teams using each session to assess their long-run pace on different tyres and fuel loads, as well as carrying out qualifying simulations. So far, around 1.5 seconds seems to be the performance gap between the medium tyre and the soft tyre.

One variable in the strategy calculations could come from the weather, with rain predicted for tomorrow. If it does rain during the weekend, the work carried out today might be less relevant, with teams having to extrapolate strategies for qualifying and the race according to the prevailing conditions.

In order to have a read of all the compounds, in case rain limits dry running tomorrow, it was important for the teams to try every tyre today. The high working range hard tyre in particular proved especially suited to the demands of Suzuka.

Paul Hembery: "The drivers experienced quite slippery conditions at the beginning of free practice. This improved as more rubber was laid on the surface. Continuing the pattern that we have seen frequently this season, last year's pole time was already beaten in FP1, but with rain due tomorrow, we are likely to see a different type of challenge in qualifying. Today there was a lot of work on the hard compound, which seems to be a very good race tyre in these conditions. However if we experience cooler conditions on Sunday, then the track could swing back towards the medium compound."