Perez confirms he will stay at Force India 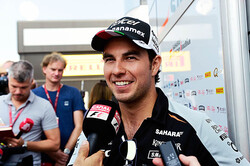 After months of mysterious assurances and denials, Sergio Perez has finally confirmed that he will be staying with Force India for a fourth season in 2017.

While the team has continued to claim the Mexican would partner Nico Hulkenberg next season, Perez has insisted that the final decision was down to his sponsors.

Linked with Williams, Renault and even Haas, the start of the Sepang weekend saw a frustrated Perez state that a decision would be finalised by next week's Japanese Grand Prix, the Mexican even hinting that he was now looking beyond F1.

Hours after today's Grand Prix, having clearly sorted everything with his backers, Perez issued a brief statement confirming that he will remain with Force India.

"I'm pleased to confirm that I will be racing with Sahara Force India in 2017," it read, "as the team and my supporters have concluded their agreements.

"I'm very happy with this team and I have a good feeling for the future," it continued. "I've seen the progress we've made over last couple of years and I'm sure we have the potential to achieve even more going forward.

"The team knows me well and it's important to have stability, especially with some big rule changes planned for next year. I'm excited for the rest of this season and for the challenge that awaits all of us in 2017.

"I thank all the team for believing in me and I will do my best repay their faith with points, podiums and hopefully wins. I also want to thank our Mexican partners, especially Telmex and Telcel, who have been supporting me since I was a young boy. They continue to play an important role in my journey through the sport."