Carey already at odds with Ecclestone? 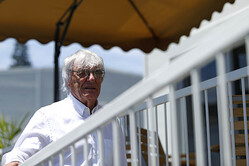 Bernie Ecclestone has never made any secret of his belief that Formula One needs to be run by a dictator.

And until now, that has been the way. Be it from his Knightsbridge office or patrolling the paddock, the 85-year-old runs the sport with a rod of iron.

A close friend of Russian leader Vladimir Putin, and controversial admirer of the likes of Mussolini - for getting the trains to run on time -the Briton has never made any secret of his belief that in order to tie everything together, keep disputing team bosses in order, guarantee race organisers pay their way and shareholders see a mighty return on investment, a rod of iron is needed.

However, the sport's new boss, Chase Carey, who comes from 21st Century Fox, and is already eyeing how Disney might help take the sport to another level, believes dictatorship is not the way to go.

Despite having previously said he would remain in the UK over the Singapore weekend to oversee the Liberty Media deal, Ecclestone was a last minute visitor to the event, accompanying Mr Carey.

However, it wasn't Ecclestone who showed the sport's 'new boss' around and introduced him to all and sundry, that task was left to CVC boss Donald McKenzie.

And, ironically, as Ecclestone oversaw events from behind the smoked glass of his motorhome, ruling his kingdom with his customary attention to detail, elsewhere in the paddock Mr Carey was trying a different approach.

Speaking to the official F1 website, ironically the one that Bernie fought tooth and nail for, despite his widely known apathy towards all things ether-based, Carey set out his stall.

"Realistically what I am doing in the next few months is probably more listening to what people have to say," he said. "You cannot make everybody happy all the time, but you've got to understand what everybody wants and then find a path.

"That is not a task for a committee," he admitted, "as committees tend to become bureaucratic. But there also can't be a dictatorship, even if probably here they are used to it.

"They need leadership," he continued, "and leadership means that you create a vision to achieve the right goals for the future. Successful businesses are built on successful leadership that understands what every party wants. There have to be compromises."

Though Ecclestone will remain CEO for three years, throughout the weekend, despite the smiles and words, there was a distinct feeling that his nose was slightly out of joint.

While team bosses, drivers and officials showed him the usual respect, as has been the case in recent weeks it is the media which has been most noticeable in criticising his methods and speculating on his future.

"Bernie is the CEO, so Bernie is going to lead it and I will work with Bernie to establish some kind of strategic plan to where you want to go," said Carey.

However, one couldn't help but feel that Ecclestone, a man who has ruled the sport for decades, built it into what it is today and made a lot of people very rich in the process, had his Poker face firmly in place for much of the weekend, the veteran wheeler-dealer having seen and heard it all before.

In an interview with Martin Brundle for Sky Sports F1, Ecclestone resemble The Simpsons Mr Burns than ever.

Indeed, as Carey continued glad handing in the paddock, one could almost hear an elongated "ex… cell… ent..." escape the 85-year-old's pursed lips.

Had the camera wandered to his feet, is it possible his shoes were of monitor lizard?