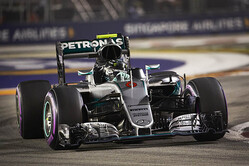 In many ways, we are about to head into the great unknown.

This morning's session, due to the fact that it took place in daylight, has little relevance in terms of qualifying or the race, both of which take place at night.

That said, it gave us an inkling of who is hot and who isn't as well as throwing up a few of the issues to look out for.

While Nico Rosberg set the pace, Lewis Hamilton had another difficult session. Following his hydraulic leak in FP2, the Briton had a couple of moments earlier today, needing to take advantage of the escape road at T7 on both occasions. Fact is, he appears to be overdriving the car. Whether this is due to the increasing pressure from his teammate or memories of last year's debacle, the Briton does not appear at one with his car.

As expected, Red Bull is looking very strong, and appears most likely to mount a serious challenge to Mercedes. Furthermore, while the latest Renault update was originally only going to be available to Max Verstappen, Daniel Ricciardo will now receive it, as will both Renault drivers.

Ferrari, much like Mercedes, is a team experiencing mixed fortunes here. While Kimi Raikkonen has quietly got on with things, and is third overall, Sebastian Vettel was clearly unhappy this morning and returned to yesterday's settings.

Toro Rosso, which is running its two drivers with different aero packages, is looking strong, and following difficult races in Belgium and Italy the Faenza outfit, celebrating its 200th Grand Prix, could do with a good result here.

Force India looks to be doing its usual of relying on tyre strategy, and while Sergio Perez was a little off the mark earlier, the Silverstone-based team looks likely to have a better weekend here than rivals Williams, who have not looked convincing.

Though the weekend is still young, McLaren, which came here believing it was on the verge of becoming the fourth team, has to be mightily disappointed at the seeming lack of pace here. The situation was probably best summed up when Jenson Button asked where he was on the timesheets following his qualifying sim run earlier, told "P16", the Briton sighed "wow!".

With a number of updates, Haas must have coming here expecting great things. How disappointing therefore to hear Romain Grosjean claim that this was "the worst car" he has "driven in a very, very long time" at the end of this morning's session. That said, with Esteban Gutierrez looking quite at ease, are the French driver's problems all down to the car?

Despite the updated engine, Renault faces another difficult weekend, as do Sauber and Manor, all three hoping that Singapore springs one of its usual surprises especially tomorrow.

As is ever the case with street circuits, pole position is important, over the last five years the pole-man has gone on to win on four occasions.

The lights go green and Wehrlein leads the way, followed by Rosberg, Palmer, Ocon, Grosjean, Magnussen and Hamilton. All but the Manors, who are on softs, are on ultras.

On his first flying lap Rosberg locks-up in T2, meaning Hamilton is quicker in the first sector. The Briton maintains the pace in S2, and while Rosberg crosses the line at 45.316, his teammate responds with a 45.167.

Grosjean goes third (47.609), ahead of Palmer, Magnussen, Ericsson and Gutierrez.

No sooner has Hulkenberg posted 46.081 to go third than, from out of nowhere, Massa produces a 46.056. Teammate Bottas posts 46.086 to bag fifth, thereby sandwiching the Force India.

A 45.499 sees Sainz go third only to be demoted by countryman Alonso who stops the clock at 45.473. The Toro Rosso driver is on the supers, while everyone else, bar his teammate, is on ultras.

"I think the front anti-roll bar is broken," warns Vettel as his first sector time is 5s off the pace.

Meanwhile, Ricciardo is on a hot lap, the Australian quickest in the first two sectors. At the line the Red Bull driver posts 44.255 to go quickest by 0.709. Vettel posts 49.116 to go twenty-second... the German and his aware that there simply isn't time to replace his anti-roll bar. Though he posts PBs in the first two sectors of his next lap it is clear something is very wrong, consequently he pits.

TV replay shows the German taking a number of corners on three wheels as his suspension appear to be seriously out of kilter. "It's just stupid, losing time," says Vettel.

While the crew gets to work, the demeanour suggests that the problem cannot be resolved in time.

As the flag is waved, Kvyat improves to fifth, while Hulkenberg appears to have missed the flag and may not be able to complete another lap.

Lots of PBs but no significant improvements... that said, Perez posts 45.204 to go fifth.

A year after taking pole here, Vettel will start from 22nd tomorrow as he fails to make it through to Q2, as do Magnussen, Nasr, Palmer, Wehrlein and Ocon.

Benefitting from Vettel's misfortune, Ericsson is first out for Q2, followed by the Mercedes duo.

"Will be interesting to see though if any teams go for supersoft as a starting tyre by using it to set their best times in Q2," says Pirelli, as the Red Bull duo appear to be doing just that.

The Toro Rosso duo go third (Sainz) and fourth, only to be demoted when Raikkonen posts 44.159 to take third, albeit 1.139s off Rosberg's pace.

"Not enough front end, too much front locking, but when I use the switch, too much rear locking," reports Button.

The Mercedes and Red Bull duos have settled for their times, as have Raikkonen... and Ericsson. The rest head out to try again.

PBs in S1 for both Kvyat and Button, while Alonso also looks set to improve.

However, Grosjean is off and in the barriers at T10. Elsewhere, Button has stopped on track also, the Briton reporting that a brush with the wall broke his steering.

Clearly winded, Grosjean reports that he is OK. "I don't know what happened under braking," sighs Grosjean. "Okay, sorry dude," comes the response.

Rosberg is quickest, ahead of Hamilton, Ricciardo, Verstappen, Raikkonen, Kvyat, Sainz, Alonso, Perez and Hulkenberg. That's the first time both Toro Rossos have made the cut to Q3 since Monaco.

Naturally, the yellow flags, following Grosjean's off, is raising questions, with the Williams duo clearly unhappy that both Force India drivers improved.

"All weekend I've not been very quick," admits Button. "The car felt much better in qualifying, and my lap was definitely good enough to get into Q3 but I tapped the wall... not very hard, but enough..."

Officials announce a short delay to the start of Q3 as the barrier at T10 needs to be repaired.

The session gets underway and Hulkenberg is first out, followed by the rest. In no time at all, all bar Kvyat are on track.

A big moment for Ricciardo in T5, the Red Bull all over the kerb.

Hulkenberg posts 44.954 but all eyes are on the Mercedes duo and the Red Bulls.

Ahead of the final assault, and with Kvyat still to run, its Rosberg, Hamilton, Raikkonen, Ricciardo, Verstappen, Sainz, Alonso, Hulkenberg and Perez.

As Kvyat heads out, Rosberg complains that his lap wasn't perfect, that he had oversteer in the final sector.

Last out is Raikkonen, who carries Ferrari's hopes at present.

Verstappen, Sainz and the Force Indias are the only drivers to post PBs in S1.

Ricciardo goes second with a 43.115 while Verstappen fails to improve.

Hamilton also fails to improve, the Briton making a mistake at T1 and also having a poor middle sector.

So, deep breath, Rosberg will start from pole, ahead of Ricciardo, Hamilton, Verstappen, Raikkonen, Sainz, Kvyat, Hulkenberg, Alonso and Perez.

Though let's see if the stewards have anything to say about Perez' time.

"Not pole, but not bad," says Ricciardo. "Cheers guys."

All of which sets us up very, very nicely for tomorrow.