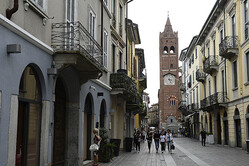 There's something about Monza, home of the Italian Grand Prix, that clearly gives the team goose bumps as they dissect the latest round of the championship.

Chris Balfe, Mat Coch and Max Noble can't hide their enthusiasm for the fabled Italian circuit, suggesting it goes a long way to making up for what tend to be fairly predictable races. The question is however, for how much longer, given the suggested fate of the parkland circuit.

The race, or moreover Nico Rosberg's performance, had Balfe thinking perhaps there really are two Nico's, the good one and his evil twin, as Max Noble has previously suggested. If so, does that mean there are two Lewis' also... the one who can start races well had the weekend off?

Nothing gets the team's motors running quite like Jenson Button's sabbatical, an announcement Balfe in particular takes great exception to.

There's good business sense there of course, and our editor concedes that on McLaren's part, but nonetheless doesn't hold back on voicing his opinion on how the situation was handled.

This however proves only to be the curtain raiser for discussion on Ferrari. While it may have nabbed third place on home ground there are confusing and concerning messages coming from the squad's top brass. For Balfe and Noble they fear a return to the dark ages – that long bleak title-less period from 1980 to 1999.

The possible sale of the sport is also discussed briefly, with suggestions there is far more to any buy-out than meets the eye.

Another date clash with Le Mans is considered a bad move, while Balfe, from henceforth known as Marcus Balfus, saves some late praise, and even more bad puns, for the bitter end.