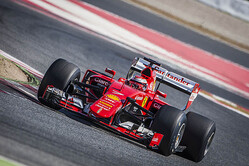 Testing and development of Pirelli's new 2017-sized tyres continues this week, with Ferrari and Mercedes in action at Barcelona and Paul Ricard respectively, using adapted mule cars designed to simulate 2017 levels of downforce.

The new tyres are 25% wider than the current tyres at both the front and rear: part of a package of measures being introduced to make next year's cars notably faster.

Kimi Raikkonen took the wheel for Ferrari today, with Sebastian Vettel due to take over tomorrow in their two-day test.

Meanwhile, as previously reported, Mercedes is at Paul Ricard for three days, with Pascal Wehrlein driving on each day.

The slick tyres are the focus for both teams during this week's two sessions. The test programme, evaluating new compounds and constructions, will then continue later this month.

111 laps were completed by Ferrari and 134 laps by Mercedes today with no issues, in conditions that remained warm and dry at both venues.