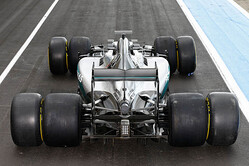 Pascal Wehrlein was at the wheel of a modified version of the 2015 championship winning F1 W06 Hybrid at the German team began a three-day programme, its first experience of the new wider, heavier tyres.

Wehrlein will be in action for all three days of the test.

Check out our gallery from Paul Ricard, here.