Button to try Halo in FP1 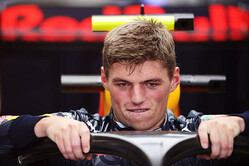 Jenson Button is to test the Halo in FP1 at Monza as McLaren tries the controversial device for the first time.

At Spa last week, Nico Rosberg, Nico Hulkenberg, Daniel Ricciardo and Carlos Sainz all ran with the device, the Mercedes driver posting the fastest time of the morning while sporting it.

The reaction was favourable, though all admitted that they need to spend more time with it and in a variety of conditions.

This morning, McLaren and Button join the 'Halo club' when they try it in FP1, along with Max Verstappen (pictured) and Sergio Perez.

Despite a hard push by the sport's powers-that-be to introduce it in 2017, the idea was rejected by the F1 Strategy Group and 2018 is now the earliest it might appear on cars.