Wolff on Verstappen... "refreshing but dangerous" 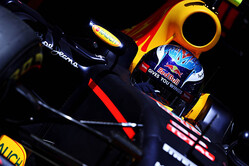 While nobody doubts the sheer speed, aggression and outright balls of Max Verstappen, one cannot help but feel that sooner or later it is going to go wrong.

In reaction to the youngster's signing by Toro Rosso in late 2014, the FIA changed the superlicence rules as it tried to come to terms with the fact that the teenager would be making his F1 (test) debut aged just 16 and lining up on the Melbourne grid the following year aged 17.

At the end of that debut season the sport's governing body officially recognised the youngster's talent when, at the FIA Awards in Paris, Verstappen was recognised as Personality of the Year, Rookie of the Year and Action of the Year - the first time anyone had claimed more than one of the non-championship related awards in the same season.

Since then Verstappen has gone from strength to strength, culminating in him being drafted into the Red Bull team five races into the current season and winning on his debut, the only driver other than a Mercedes driver to stand atop the podium this season.

However, along the way the youngster has built a reputation not only for his bravery, but for what some consider to be a failure to respect his rivals and understand the real risks some of his tactics involve.

Though a keen fan, Toto Wolff, who tried to tempt Verstappen to the Mercedes driver development programme in 2014, fears for the youngster

"He is refreshing for me," he told reporters following yesterday's Belgian Grand Prix which saw the Red Bull driver in the thick of the action. "He is a young boy I like a lot. He comes in here with no fear, no respect, puts the elbows out.

"It reminds me of the great ones, it reminds me of Lewis, of Ayrton Senna, he continued. "You can see that some guys are starting to think twice about how to overtake him.

"Until now, all that has proven he is on the right track," he continued. "The FIA has not penalised it, the only thing that has happened is that he has been given a hard time in the drivers' briefings. Maybe next time, he will have a harder time.

"I just fear it might end up in the wall heavily one day," he admitted. "It is refreshing but dangerous."