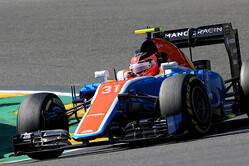 Esteban is delighted, after taking his first chequered flag in 16th place. He had a flawless weekend and we're thrilled for him! But at the same time, we're gutted for Pascal, for whom an opening lap incident denied him a shot at a really great race today.

Congratulations, Esteban. A fantastic debut weekend. You should be very proud.
Esteban Ocon: "I am. I was really proud lining up on the grid and so proud to take the chequered flag. It's a day I'll remember for the rest of my life."

Talk us through your race, because it wasn't exactly a straightforward initiation, was it? Some big incidents, a red flag, a safety car, a restart - just a few things thrown in for you to contend with!
EO: "Ha ha. It wasn't an easy race, that's for sure, but I'm very satisfied with my first Grand Prix. There were so many things happening in that first lap; it was crazy out there. It was hard for me to stay away from it all and at the same time push hard and fight for position. On top of that I had to remember all the procedures as well; it's not difficult, it's just remembering them in the heat of the moment and of course everything happens so much faster in F1. It was not easy to manage the red flag situation, but most importantly I'm glad Kevin seems to be okay. So I think we did the maximum with the car today and I'm happy with 16th position and finishing ahead of the Sauber."

Esteban, you've learned such a lot in a really short space of time. What next?
EO: "Yes, I learned a lot about managing the race, particularly with all the different situations going on. This track is so high for degradation that it was also a really good test of tyre management; I'm very pleased with that because, really, we didn't have the tyres left to push until the end. As for what next, well, I'm not tired, I could easily do another 24 hours! But, I guess I have to wait a week. There's a lot to think about and reflect on, but I'm ready for Monza, where I want to work on Qualifying and make a good step forward. My thanks to everyone in the team for a great weekend and I'm so excited for the next one!"

Pascal, incredibly bad luck. This was a race with such promise for you. There was so much chaos in that opening lap. What happened?
Pascal Wehrlein: "Yes, I was really unlucky. In Turn 5 the two drivers in front of me were fighting for position, braking late, missing the line, so I tried to overtake them into Turn 6 on the outside. Then, both came back on the line and when I saw that I wanted to brake and move to the inside but I couldn't avoid the crash. I'm really unhappy about it but that is what can happen on the first lap when you're starting in the midfield; that part I can't complain about and that's where I want us to be starting next time in Monza.

You had a really strong weekend though. Sad for the race, but you must feel really encouraged about where the car was here generally?
PW: "I think P9 in Q1 was a really good measure of how strong we were here this weekend. That's the bit I'll take forward into Monza and work to maintain. Of course, I'm sad for the team because of what could have been today in the race, especially with all the incidents that created some opportunities. But, we'll come back fighting next weekend. Not long to wait!"

Dave Ryan, Racing Director: "A mixed result today. On the one hand, a great debut by Esteban, who didn't put a foot wrong all weekend. He finished his first race in 16th place and I'm sure it will be an upward trajectory for him from here. I'm really looking forward to seeing how he gets on in Monza.

"For Pascal, a real disappointment that he had to retire at the end of the first lap, but huge positives for him to take away from this race. His performance all weekend has been outstanding and, again, really excited to see how he takes this forward to Monza.

"From a team perspective, generally it's been a good event for us, but we have had a few hiccups, which we need to sort out before Monza. That will be our focus over the next few days."