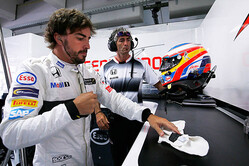 Following his problem in Q1, Honda has elected to change Fernando Alonso's engine for the third time this weekend.

One of the last on track for Q1, the Spaniard pulled off just after Eau Rouge, evoking memories of Michael Schumacher's short-lived race debut here 25 years ago.

"During the final laps of FP3, his ICE showed an oil pressure drop," admitted Honda boss, Yusuke Hasegawa. We started investigating the issue immediately following the session, and, after data checks, maintenance and understanding the risks, we took a team decision to run the car in qualifying.

"Unfortunately the oil pressure couldn’t be maintained," he continued, "and it was duly necessary to stop the car at the start of Q1. We’re still investigating the cause of the problem."

Hasegawa later confirmed that the engine would be changed - Alonso's third this weekend - but insisted that the various issues this weekend are unrelated and that the updates introduced here had no bearing.

Despite Alonso incurring a total penalty count of 60 places, it wasn't all bad for McLaren, Jenson Button putting his car ninth on the grid.

"Jenson showed today what the car can do," said Alonso. "In FP3 I was also P10, which I was a little bit surprised about knowing the nature of the circuit.

"I read somewhere that last year we were 3.7s off pole position, today we are 1.3, so the progress is amazing, because it's not that that other cars haven't improved as well."

Though Alonso didn't post a time in qualifying in accordance with Article 35.1 of the Sporting Regulations, the stewards granted him permission to start the race as he had set satisfactory times in practice.