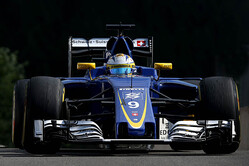 The Swede was handed the penalty after Sauber opted to change the Turbocharger on his car, his sixth such component of the season and therefore in breach of Article 23.4 (a) of the Sporting Regulations.

Ericsson finished thirteenth in this morning's opening session, his Sauber C35 sporting a number of updates, including new front wing and shorter nose, the fruit of the team's recent buy-out by Longbow finance.

The Hinwil outfit has also replaced the Swede's ICE (internal combustion engine), but since this was within his allowed allocation there is no penalty.