Another grid penalty for Hamilton 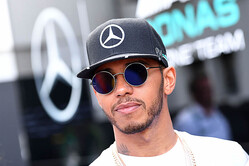 As expected, Lewis Hamilton has been handed another grid penalty for this weekend's Belgian Grand Prix.

The world champion, had already incurred a 15-place grid penalty after his team fitted a new turbocharger and MGU-H, which took him over the 'magical' limit of 5, ahead of this morning's opening session.

With the crew working on his car throughout the break it was clear that another hit was in the pipeline, and sure enough, shortly after the second session got underway the team confirmed that it had installed a whole new power unit which took his turbocharger and MGU-H total up to 7, thereby incurring a further 15-place penalty.

With the German team expected to introduce an engine upgrade this weekend, it is entirely impossible - if not a downright certainty - that further penalties will follow, albeit at a circuit where overtaking is a lot easier than at some of the tracks that follow.