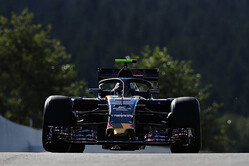 Ahead of today's opening session, which sees the second half of the season get underway following the summer break, the air temperature is 24 degrees C, whilst the track temperature is 25 degrees. It is bright and sunny.

In case you haven't been following (tut, tut), Esteban Ocon makes his F1 race debut this weekend, the French youngster replacing Rio Haryanto at Manor after the Indonesian ran out of money.

Though the Halo device will not now be introduced next season, four drivers will be trying it in this session as the teams and FIA try to learn more about it, they are, Nico Rosberg, Nico Hulkenberg, Carlos Sainz and Daniel Ricciardo.

Following all that speculation, Lewis Hamilton has admitted that he expects a major grid penalty this weekend, though Mercedes has yet to confirm what components will be replaced and how many times. The situation is further complicated by the fact that the German manufacturer has updates in the pipeline which would necessitate new components and thereby further penalties.

As ever, most of the teams are trying updates, however, Sauber appears to lead the way with a seriously revised C35 including new front wing and nose and new floor.

While there are no noteworthy changes to the track, those cheeky rascals at the FIA have installed kerb sensors at Raidillon (T4) & Blanchimont (T16 & T17) in order to monitor track limits.

Over the course of today's sessions each driver will also have two sets of unmarked tyres which, according to Pirelli, are modified to even further protect the tyre from possible consequences generated by accidental multiple impacts on kerbs or other external bodies".

As one might expect given the possible 'rustiness' following the break, the nature of the circuit and the updates, there are no third drivers on duty this morning.

Palmer is first out, one of several drivers yet to confirm a seat for next season. He is followed by Wehrlein, Magnussen, Nasr, Ricciardo and Raikkonen.

A number of drivers are already running the prototype tyres.

Six minutes into the session, Verstappen heads out, the last driver to do so. This is essentially the youngster's home race.

Mercedes confirms: "Fresh power units this morning for both Hamilton and Rosberg. For Hamilton, this comprises ICE 4, MGU-K 4, MGU-H 6 and TC 6. This incurs a 15 place grid penalty. For Rosberg it is his 4th of all those items."

After several minutes of total inactivity, the Manor duo break the deadlock. They are followed by the Force India pair, and following his sole installation lap, Hulkenberg has now dumped his Halo.

More and more driver head out and finally we get some lap times, of the first wave Rosberg - still sporting his Halo - is quickest (49.481), ahead of Raikkonen, Hulkenberg, Perez and Ricciardo.

On-board footage gives us our first in-car footage of a car in action sporting the proposed safety device.

Woah! A massive moment for Verstappen who gets his rear end very much out of shape in T13. Back in the Red Bull garage there's a mixture of emotions from the Verstappen family.

A scrappy lap for Palmer, who runs wide in a number of corners.

Vettel posts 50.970 to go third, as Rosberg continues with his Halo.

As Vettel improves to second (50.445), there are a mixture of tyres indeed all three compounds are in use in addition to the unmarked.

Rosberg goes quickest in all three sectors to post a 48.348, teammate Hamilton, also on the supersofts, posting 49.078 moments later.

Following his lap, Hamilton visibly slows and begins his long journey back to the pits. That said, he subsequently picks up speed and continues.

Perez improves to third and Hulkenberg sixth, the Silverstone based outfit hoping the ideal weather conditions continue as this would compromise those teams, including Ferrari, who have been more aggressive in their tyre choice.

In the Ferrari garage mechanics are at work on Vettel's front brakes.

At 40 minutes, when the teams have to hand back a set of tyres, it's: Rosberg, Hamilton, Perez, Hulkenberg, Vettel, Raikkonen, Ricciardo, Bottas, Gutierrez and Verstappen. Alonso, who has completed just 3 laps due to a suspected water leak, is the only driver yet to post a time.

Ocon overshoots his pit slot and almost clips a photographer. "I braked a bit late, quite a lot" admits the Frenchman.

The last driver on track before silence descends is Verstappen. Indeed, silence doesn't descend for the youngster continues on his mediums.

Grosjean improves to ninth, posting PBs in all three sectors.

Great shot of Hamilton riding the kerbs at Raidillon, the world champion clearly pushing to the limit.

Raikkonen, on softs, goes third (49.147), having ben quickest in the first and final sectors. Earlier, Vettel was also losing time in S2.

"I don't know what to say, I just cannot do more than one lap," complains Grosjean who, not for the first time, is unhappy with the Haas. "We need to sort it out." The team confirms that it can see the issue.

As the Frenchman runs wide in Pouhon, teammate Gutierrez also has issues. "I'm having lots of bad vibrations on the brakes," says the Mexican.

Hulkenberg is concerned at a number of warning he's getting from his dashboard but the team clearly doesn't share his fears.

Palmer slows as a puff of smoke emerges from the rear of his car. "Problem, problem," he tells his team. "Something felt strange on the car before I braked for Les Combes, it pulled a bit to the right."

"I've got no drive," adds Palmer, just yards from the pitlane entrance, the Briton somehow getting his Renault safely back to base.

With around 16 minutes remaining, Bottas (24) has completed the most laps, ahead of Massa and Palmer (20), Ocon and Ricciardo (19).

A hairy moment for Ericsson as the Sauber momentarily gets away from him in T13. Elsewhere, a moment for Grosjean on the run to the final chicane, somehow, he not only saves it but improves to tenth (50.899).

With Alonso unlikely to appear again this session, there are problems for Button also. "I don't know if we're doing any damage, but the oscillations are still there on gear changes," warns the Briton.

Having been kept honest by Haryanto, Wehrlein now finds himself over a second down on new teammate Ocon.

Running wide in T14, the frustration continues for Grosjean.

In the McLaren garage, Alonso, cap back to front on his head, watches the data screens with his engineers. He doesn't seem outwardly bothered at the lack of running.