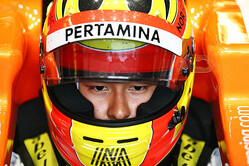 State-owned oil company Pertamina is to no longer display its branding on Manor's cars following the dropping of Rio Haryanto.

Last week, the Indonesian driver was dropped by the Banbury team after it was clear he was no longer able to fulfil his contractual obligations in terms of sponsorship.

The Indonesian driver subsequently revealed that whilst Manor was demanding 15 million euros, his sponsors, chief of whom was Pertamina which is understood to have handed over 5 million, were only able to come up with 8 million in total.

Indeed, the 8 million only financed Haryanto up to the Hungarian round of the championship but the team allowed him to retain his seat for Germany as he continued to try to find the necessary backing.

Now, despite being offered the opportunity to keep its branding in place, Pertamina has opted to remove its name from the cars that will be driven by Pascal Wehrlein and Esteban Ocon for the remainder of the season.

"The Manor Racing team has offered to let us continue advertising on its cars. However, we have decided to discontinue the advertising," Pertamina spokeswoman Wianda Pusponegoro told the Jakarta Post.

This follows the Indonesian sports ministry's disappointment at Manor's decision.

"We understand the situation in which Manor asked Rio and his management to pay the remaining fees before the Hungarian Grand Prix on July 24 and it turned out that Manor gave another chance for Rio to race until German Grand Prix. The sports ministry appreciates that," he added.

"We asked to use state budget to finance Rio, but it wasn’t allowed by the lawmakers. The parliament fully supports Rio’s involvement in Formula 1 but using the state budget is not the option."