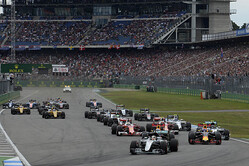 The swathes of empty grandstands on Friday painted a worrying picture, especially as a number had already been covered up - Shanghai style - in an attempt to mask how bad the situation is.

The days, at the height of the Schumacher era, when Germany hosted two rounds of the championship, a distant memory, even the presence of Sebastian Vettel, Nico Rosberg, Nico Hulkenberg and Pascal Wehrlein, not to mention the all-conquering Mercedes team, couldn't put (German) bums on seats.

Thankfully attendance improved over the course of the weekend, but even so the 57,000 who attended on Sunday - up on 2014's figure - wasn't enough to reach the reported break-even figure of 75,000.

Plans for the race to continue alternating between Hockenheim and the Nurburgring came to grief when the new owners of the latter were unable to come up with the necessary hosting fee, consequently last year, for the first time since 1960 Germany didn't host a race, and this at a time Mercedes - albeit based in the UK - was heading for its second consecutive title.

Although it has a contract for 2018, Katja Heim, founder of marketing and communications agency KHP, which specialises in motorsport, and F1 in particular, fears that the circuit will not be able to host the race in 2017, a situation that would remove Germany from the calendar once again and put the long-term future of the event in further doubt.

"I really doubt that they would do the 2017 race," she admitted. "They can't take a risk and I'm not sure whether there is any party or organisation which would guarantee or help them to avoid any risks.

"It could be that there is no event next year and it could be that all of a sudden Formula One will be such a hot potato again that Hockenheim says, Okay we go for it."

Speaking at the weekend, Sebastian Vettel, who attended race at Hockenheim with his father at the height of Schumacher's golden era, said he believes there are numerous reasons for the sport's decline in his country.

"He was obviously the first German world champion and the first one that made Formula One really popular in Germany," he said of Schumacher. "Obviously Formula One has been around for a long time and also there were a lot of races in Germany, but I think the real difference is that we didn't really have a local hero for a very, very long time.

"There were Germans participating, but obviously if there is one really, really successful one, winning a lot of races, that's what attracts a lot of the attention. That's what also caused the hype initially and caused the grandstands to be full.

"I think entering the motodrom in the old days was a bit different than nowadays, because the track was different," he continued, referring to the massive overhaul of the track, "all the other parts of the track there was only trees, so I think that's different now, you have big grandstands around the track, a bit more spread.

"Plus the fact that it's clear nowadays, let's say the last couple of years haven't been that popular, there's been a lot of negative in the press and obviously people, fans, follow that as well and that doesn't help.

"Formula One has lost a little bit of its excitement in terms of just if you listen, the cars are a lot more quiet, which also then looks a little bit less spectacular, even though it's not true, corners speeds are as high as they've ever been. Just when we go on power it doesn't sound as nice as it probably did in the past.

"So there's a couple of reasons and I think in general grandstand tickets are too expensive. In my point of view they should be a lot cheaper, a lot more affordable, so a lot more people would be tempted to spontaneously say 'yes, let's go, we want to be part of it and let's not miss it'. So I think there are a couple of reasons."

Of course, a German world champion might help, but based on his recent form that is unlikely to be Nico Rosberg, while Vettel is at present having difficulty even making it to the podium.

Perhaps that explains why FOM's cameras were so keen to pick out a certain Mick Schumacher in the crowd throughout the weekend, the F4 driver, and son of the legendary seven-time champion, seen in both the Mercedes and Ferrari garages over the course of the three days.