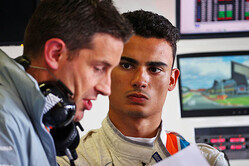 Great job Pascal, in your first home race. How does that feel?
Pascal Wehrlein: "Yes, I'm really happy. It was a very straightforward race, so there were no opportunities to improve further through the field, but we still achieved our target of finishing ahead of Sauber and we got a Renault too. So it was a good race."

How did the strategy work out for you today?
PW: "Pretty good. I was on a three stop strategy, so it meant that there were many cars to overtake - and overtake again - so it made the race very interesting and fun. For most of the race I was running without a front-wing end plate, but it didn't hurt us too much."

What was it like racing in front of your home crowd?
PW: "It was a very special atmosphere and you could really feel the crowd. Before the race, we stopped in the Motodrom to greet the fans and they were really great and supportive. It is something very special to see so many German flags and I think they got a good race today after so long without a German Grand Prix. I'm happy that I got a good result too. Now we have the Summer Break and though I'm not that eager to hang up my helmet for four weeks, everyone in the team deserves a holiday, so my thanks to them and I'm looking forward to us coming back stronger than ever in Spa."

A not-so-straightforward race for you today Rio, but two cars home is a good team result?
Rio Haryanto: "Overall, the race wasn't too bad for me. We were still fighting with Sauber, which is what we need to keep doing. Early in the race, I saw an opportunity to pass my team-mate when the gap between us came right down. Unfortunately it didn't work out and we ended up touching, so I damaged my front wing in the process. We kept going until my first pit stop and in the meantime I was able to keep in touch with Ericsson, just ahead between Pascal and me."

At your first stop you pitted for a new nose, which set you back a little bit?
RH: "Yes, we knew we had some damage, but we kept going until our first planned stop, then made the nose change at the same time. It takes a bit longer, so I lost some time, but after that I was catching back up to Ericsson and trading places with Nasr as our respective strategies played out."

Good to end the first part of the season with a two-car finish. Now you can look forward to some rest?
RH: "Yes, it was a good weekend for us and a nice result for the team at an important race for us. Not too much rest though; we're busy working to ensure I continue into the second half of the season. But I do wish the rest of the team a good break because it has been a very long 12 races and everyone has worked incredibly hard. My thanks to them for a good job so far."

Dave Ryan, Racing Director: "It's really good to end the first half of the season on a positive note and with a good team result at Pascal and Mercedes-Benz' home Grand Prix. Our strategy worked well and our performance was strong versus the cars around us, which enabled us to displace Sauber and a Renault. We did pick up a bit of damage on both cars when we had contact between our two drivers, which was less than ideal, but fortunately it didn't hurt our race as much as it could and obviously we need to avoid that in the future and focus on the fight with our competitors. As we embark on the summer break, I'd like to take this opportunity to thank everyone in the team - trackside and back at base - for a tremendous effort in the first 12 races. It has been a real challenge and a huge amount of hard work, but we head into the shutdown period with our first point and ahead of Sauber in the championship. I look forward to seeing everyone refreshed in four weeks' time so we can keep things that way."