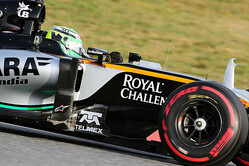 A strong performance from Sahara Force India saw Nico Hulkenberg qualify in seventh place for his home Grand Prix at Hockenheim. Teammate Sergio Perez was close behind and will start the race from ninth.

Nico Hulkenberg: "I'm feeling pretty happy to qualify in seventh for my home race - it's best of the rest behind the top three teams and a good effort by the whole team. Our objective is always to maximise our potential and it feels like we achieved that today. Most of my laps in the session came together nicely and my final effort in Q3 was spot on. We can expect a tough fight for good points tomorrow, but we are in a good starting position and we've looked strong here in all the sessions. The long run pace is competitive, too, so we've got every chance of getting a great result this weekend. There is talk of some rain tomorrow and to be honest I would not mind a shower during the race, but let's wait and see what happens."

Sergio Perez: "It was a fun and very intense fight with Nico and the two Williams cars throughout qualifying, and in the end it was really close between the four of us. It was crucial to get through Q1 on one set of tyres because some other teams had to use two sets and this gave us a small advantage in Q2, which helped us make the top ten. On my last lap of Q3 I struggled a bit through some of the right-hand corners; I think I may have picked something up on my front wing - maybe some debris - and that cost me some time, but it's something I will analyse with the team. In the end, it was so close and just a few hundredths of a second made the difference. Tomorrow is going to be interesting. We are starting on the supersofts on which we qualified and we will need to work well as a team to make the strategy work and score some important points."

Robert Fernley, Deputy Team Principal: "Today's qualifying performance is a good effort from both sides of the garage and sets us up nicely for a strong race tomorrow. The car has shown good speed since the start of practice and it's satisfying to convert our potential into representative starting positions. In Q3 it was a very close fight with Williams, with Nico just edging ahead of Bottas. There are several strategy options for us to explore this evening, but we are well placed to make the most of whichever approach we take in the race. Tomorrow should bring an interesting and exciting race."