Rosberg continues to set Austria pace as the rain arrives 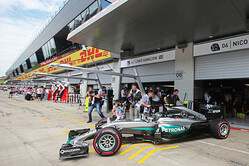 Ahead of today's second practice session, the air temperature is 24 degrees C, whilst the track temperature is 46 degrees. Whereas it was bright and sunny earlier, it has somewhat clouded over during the break and it is now said that there is a 40% chance of rain.

Fact is, just about everyone went off at one point or another, with Turns 1 and 8 proving to be the most notorious corners.

With a completely new track surface, grip, certainly in the opening sessions, was always going to be a problem, however, the drivers' overenthusiasm didn't help.

Ironically, the various changes to the Red Bull Ring appear to be damaging one team more than any other, step forward Red Bull.

Max Verstappen's session came to an end when he fell foul of the new kerbing intended to keep drivers within the track limits. Having previously lost a front wing endplate on the kerb at T8, the Dutch youngster subsequently damaged his suspension in another off.

The question is however, are the kerbs "dangerous" and "ridiculous" as Verstappen claims or were they doing their job?

Nico Rosberg topped the timesheets, ahead of teammate Lewis Hamilton and the Ferraris, while the next ten driver were covered by around a second.

With Rosberg around a second quicker than the official lap record - posted by Michael Schumacher in 2003 - it remains to be seen how much quicker the cars get as the weekend progresses... thunderstorms permitting.

Fernando Alonso tried a controversial new wing which appeared to look more radical than it performed, whilst Sebastian Vettel never actually got to run with the revised Halo device.

Both Manor drivers received reprimands following incidents earlier. Pascal Wehrlein received his for not staying above the minimum time set by the FIA ECU under the virtual safety car, while teammate Rio Haryanto got his for rejoining the track in an unsafe manner after running wide. Or should that read "unsafe Manor"?

The lights go green and with an eye on the darkening skies there is a mad scramble to get out on track, Alonso leading the way.

"A few spots of rain on the visor," warns Hamilton as Magnussen makes a pigs ear of leaving his garage and is unable to turn his car, requiring the assistance of his crew.

Barely four minutes into the session there are 16 names on the timesheets, Rosberg leading the way with a 7.967. Ricciardo is second, ahead of Vettel, Hamilton and Hulkenberg. Most drivers on supers, though a few on softs.

A wobble for Alonso in T8 and again in T9, but he is able to continue.

Raikkonen is off at T5 taking a massive sideways trip through the gravel that leaves him facing the wrong way. However, a nifty 180 in the escape road soon sees him back on track.

In quick succession Perez and Sainz are off at T8, followed by Grosjean and Button... the rain has arrived.

As the drivers tip-toe back to the pits, and refuge, there are further spins for Perez and Palmer. The wind has picked up too.

Button and Haryanto are among the last to make it back to the pits, both having moments along the way.

So, as we await the rain stopping and the session resuming, it's: Rosberg, Vettel, Ricciardo, Hulkenberg, Hamilton, Alonso, Bottas, Wehrlein, Sainz and Button. All the drivers have posted times bar Verstappen whose car is still being worked on.

After around half-an-hour of nothing, the rain has stopped and steam is rising as the sun shines down on a slowly drying track. The drivers begin to climb into their cars.

At 14:45 (local time), Ricciardo heads out of his garage on a set on inters. His rivals watch with interest.

As the Australian begins his first flying lap, he is joined on track by teammate Verstappen.

Kvyat and Sainz are next to head down the pitlane prompting the question whether it was their boss, Dietrich Mateschitz, who ordered them to get to work and entertain the fans.

Vettel is next out, the German giving a corner by corner analysis of conditions. "It is completely dry halfway down the straight between Turn 1 and 2," says the Ferrari driver, "it's completely dry."

Naturally there are no improvements, but mindful of the fact we are expecting further rain tomorrow, running in these conditions is vital.

Rosberg is the first to go off, the German overdoing it in T1. Elsewhere a spin for Verstappen at T9.

Soon all but Hamilton, Wehrlein, Nasr, Haryanto and Ericsson are on track.

Turn 1 continues to catch drivers out, Kvyat and Ricciardo amongst them.

"We think S2 is close to dry crossover," Perez is told. "Yes, totally agree," replies the Mexican. At which point he runs wide in T8.

Lapping around 2s quicker than their rivals, the McLarens revel in the mixed conditions, the Toro Rosso duo also looking good.

Perez finally pits, the Mexican having completed more laps than anyone else in this session, due, no doubt, to the fact that he didn't run in FP1 having handed his car to reserve driver Alfonso Celis.

The Ferrari duo are first to switch to slicks, Vettel emerging on ultras and Raikkonen on supers.

Ricciardo, also on ultras, reveals: "I didn't have full power when I put my foot down."

The only driver to make a significant improvement is Raikkonen (9.991), though the Finn hadn't really set a competitive time before the rain began to fall.

PBs in all three sectors see Gutierrez improve to 13th overall with a 10.183. Button and Kvyat also improve, the Russian going eighth with a 9.556.

Hamilton goes quickest in S1, the dry sector, but loses behind Gutierrez in S2. Next time around he is again quick in S1, finally crossing the line at 7.986 to go second by 0.019s.

An 8.580 sees Hulkenberg go third, as Rosberg fails to improve despite posting a PB in S1.

Next time around the German goes quickest in S1, and again in S2, a sector in which he excels. At the end of the lap the German dives into the pits.

Vettel is off at T2 and is stuck in the gravel. "I don't know what happened there," he admits, "I completely lost the car when I hit the brakes."

The replay sheds no further light on the cause, it was a very odd incident, the car snapping out sideways very aggressively under braking.