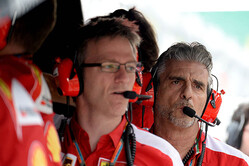 Speaking at the FIA's Sport Conference in Turin, the Briton was keen to assure fans that 2017 cars will be "beautiful".

The new regs, aimed at making the cars faster and more aggressive looking, have led to fears they might begin to look evermore ugly. With the adoption of the Halo device, not to mention the proboscis appendages witnessed a couple of years back, some fear the worst.

"Formula 1 teams focus completely on function over form and what it ends up looking like is what it ends up looking like," said the Briton. "However, all of us, or at least the vast majority of us, want our product to be beautiful and therefore we want regulations that inherently make the cars beautiful, so that when we set out to focus on function only, the regulations naturally produce beautiful cars.

"We've made a little bit of a step forward to get rid of the horrible looking noses of a couple of years ago and next year's regulations are a very conscious effort to try to make the cars both unbelievably quick and also beautiful. The proportions of next year's cars are very appealing.

"For those of us who are lucky enough to be seeing them as they get created, they look nice. I'm looking forward to seeing them racing.

"Every year is a fun challenge but a new set of regulations is particularly so," he admitted. "It's a mixture of the enjoyable and the frightening in equal measure.

"It's enjoyable because all the things you have been working on get put aside and you get to try to think completely fresh about how to attack a problem and that's always stimulating.

"It's frightening because every Formula One team faces - you have the car you are racing and the car that you are birthing - and that challenge when the rules are very stable is more easy to handle, because much of what you are doing on the racing car now will also work next.

"When there is a fresh sheet of paper it's very challenging to judge exactly how much of your resource you put on one project against the other."

Asked where the balance lies between driver, chassis and engine, with some claiming that each contributes around a third to the overall package, and where it might be in 2017, Allison said: "I would put it 20/40/40, with the driver being the twenty.

"Next year we'll see the aerodynamics, the chassis, take a slightly more prominent position in that ratio but not so much, though the power unit is still going to be extremely important.

Asked to explain the technological significance of the current power unit, Allison admitted they are a wonder to behold.

"They are exotic and remarkable beasts," he said. "In F1 we talk about thermal efficiency, that's the key metric for whether your power unit is good or not. Maybe it's not a term that's used very often in the high streets but our job is to get as much out of every calorie of fuel we put into the engine.

"We talk about 50% as the magic number for the current power units. That might not sound like a high number, but to put it in context, a decent road car is in the low 30s.

"The only other things on the planet that approach the sort of thermal efficiency we are seeing with our Formula One power units are either very academic things in universities, which are nowhere near being usable as devices or they are enormous ships, diesels that go at about 90 rpm and that have one operating condition they work at day after day. They have crankshafts that weight 600 tonnes alone.

"But we can do it with a little flexible racing engine that a driver can use around a track and control exquisitely through corners and yet it can deliver this sort of fuel consumption that nothing else is capable of."

Finally, three seasons into the new engine formula, speeds are going up and lap times coming down, yet there remains negativity.

"Some people think that lap times aren't so important, that the closeness of the racing is the only thing that matter," said Allison. "I think both matter.

"We would like every race to be a proper fist fight and it's getting more and more that way. There is some very good racing happening in the field this year and it's only going to improve.

"The historic best lap times were set a while back, but we're starting to approach those now. I'm looking forward to next year, because next year we're going to start smashing those records."