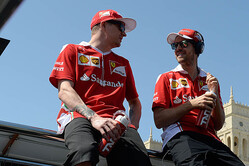 Speaking ahead of yesterday's Grand Prix, which saw Mercedes increase its lead in the team standings, Ferrari president Sergio Marchionne was still confident that the championship is up for grabs.

"The championship is completely open," he told Sky Sports F1. "Anybody can win here, and I think what's happened in the last few races has opened it up completely. So it is still possible for Ferrari to win the championship.

"Whether it does or not depends on whether we can get this car under control," he continued. "This car was born as a new technical innovation, the chassis, the engine.

"I think the engine situation left something to be desired for the first few races, we went a long way in Montreal and hopefully most of it will be taken off the table by Austria. (No, us neither).

"So that part of it doesn't bother me," he admitted. "What does bother me is the continuing problem we have with aero downforce and the temperature of the tyres.

"What we did on Friday was experiment with various sets of solutions to find out what would work and what didn't work. So we went to alternative solutions in FP3 and we saw the results.

"This is a work in progress, I think the engine, the power unit, is there, if we can get the rest of it right this machine is going to be a hell of a thing to beat. So I'm hopeful.

Asked about the driver situation for 2017, he replied: "I would love to keep Kimi, and Kimi knows fully well that the decision - which has not been made - will be made based on his performance.

Subsequently asked whether the team should shift focus to 2017, he repeated his claims that the championship remains open.

"To think that because we did not win in the first six races we have to start looking to next year is wrong," he said, according to Motorsport.com. "The race is now, so you have to focus on today. In two weeks there is Austria and, in any case, we must always try to improve the cars because it is essential."

When it was pointed out that the gap between Ferrari and Mercedes - 76 before yesterday's race and 81 after - and that therefore it is increasingly unlikely that the Italian team will catch its German rivals, he said: "I understand that very well, but the points difference does not justify such pessimism.

"That doesn't mean it will be easy," he admitted, "but the team will not give up and start to think about 2017."