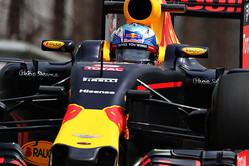 Daniel Ricciardo: "At the start we put ourselves in a good position and the aim was to get Nico. We managed to hold second and I felt pretty good in the first few laps, especially as I could see Seb wasn't catching me. After lap three we started to slide the rear and there was no way of controlling it. I went from being very optimistic about our race to being uncertain. I don't think we had the wrong strategy, one stop would have been ideal but we had to adapt and were forced into a two stop race. We were slow in the first two stints but in the third one we managed to find some pace and I passed Hulkenburg, which was good fun. I think Max suffered the same issues so that's just the way it went, I don't think we could have done anything else today. We need to understand why because we usually perform well in hot races, like Singapore. Today was a bit unexpected. I got everyone's hopes up yesterday by saying it could be the race of the season, It was, however, pretty uneventful."

Max Verstappen: "It was a tricky start, but a good end. On the supersoft and the soft tyres we had too much degradation in the rear and from there on, once we changed to the medium tyres, I felt like I was flying in the end. My lap times were coming down very nicely - I managed to drive back to eighth and almost seventh. With the start position I had it was going to be difficult to catch the front guys, but I think in the end we did a good job. Of course you want to finish higher up but that was not possible today. I had the third-fastest lap today in the race so I can't complain."

Christian Horner, Team Principal: "Ultimately a disappointing result after having started on the front row of the grid but on the supersoft and the soft tyre for both drivers today we appeared to get into quite a lot of degradation as early as laps four and five. That situation didn't change after the first stop on to the soft tyre, where again both cars reported high degradation very early, on a tyre that was supposed to go to the end of the race. It was only when we made an unplanned stop to go on to the medium tyre that the car was in a much better working range. Both drivers were competitive thereafter, ultimately coming through to finish seventh and eighth, with Max setting the third fastest lap of the race. Getting an understanding of how the tyres were operating in this grand prix is an imperative. A frustrating race but at least we got both cars to finish and we extended our lead over Williams in the Constructor Standings."